Redneck Writer Road Report #20: The Tale of the Otter

Growing up, I had the world’s best parents. OK, well, I still do. (Thanks Mom and Dad.) I also had the world’s best “second parents,” their dear friends from North Dakota that they met when the “dads” were in medical school in Dallas. As I grew up, my second parents were a constant. The dads did their residencies together, went into practice together, worked in academia together, and ultimately started clinics that became a thriving public company that was purchased by any even bigger public company. Those things didn’t matter to me. What mattered is that this couple was always someone I could turn to, for matters big and small, and that I counted on their presence and their laughter. The moms were best friends. The kids in each family were closer than blood.

I don’t see them much anymore. Last summer I received a wonderful, enormous surprise when my second mom showed up in Minneapolis at one of my book events–hell, it’s a shocker when someone in the close family and friends circle even reads my books, as the closest in are the slowest to get on board. She and her sister drove six hours round trip. I know all three of her lookalike sisters, and “Sis” walked in first. I knew her instantly, and there was “Mom” right behind her.  It was one of the top moments of the tour for me.

This summer, as many of you know, we covered different geography than last summer, the Northwest. My “second parents” split their time between Nashville, Telluride, Chattanooga, and Otter Tail Lake in western Minnesota. with the bulk of their summers at Otter Tail. When we were planning our route, we wanted to hit North and South Dakota. Otter Tail Lake wasn’t too far east from there.

“What would you think about a jaunt over to see them?” I asked Eric. These people meant nothing to him, except for what they meant to me, and we’d already visited Minnesota last summer.

“I think it would be great. These trips are the perfect way to reconnect with the people that matter. We can’t pass up those opportunities.”

Those aren’t just words to my sentimental guy. He reunites with his high school garage bandmates. He spent years tracking down a friend he’d last seen seen the summer after high school. And he treats my “people” the same way. We’d already traveled back to Buffalo, Wyoming and spent time with other dear friends and an old teacher. We’d gone to Reno mostly so I could hug my best friend from first grade and meet her daughters. We’d entertained his cousin on the Bookmobile far past our exhaustion point in Orange County, because time with him mattered.

So we planned our last stop for Otter Tail. Of course, if we stop, we must hold an event, and this one was to be in Fergus Falls, a nearby (adorable) town. But make no mistake. This location was about love, and memories, and the indelible mark some people leave on your heart.

Our first night in their lake house on Otter Tail, we kept them up too late talk-talk-talk-talk-talking. Business called the next morning, so we were up and out before them, but not before both of us accidentally honked the Bookmobile horn right outside their bedroom window at six a.m. It’s hard getting in and out the cab doors carrying stuff, and our side door was still broken. Hint: think twice before you offer us your driveway on one of these gigs!

Our event was at City Bakery, right on the old downtown Main Street. The street was encased in a perfect summer silence when we arrived. The only movement was the leaves on the trees, rustled by a light breeze. The air was cool, and the smells from City Bakery enticed us toward its door. A car pulled in and parked in front of the Bookmobile, and an older gentleman led his two granddaughters across the street to the bakery, each of their hands tucked into his. We followed them. When we stepped beyond the art deco exterior into the store, the good vibe and buzz of a happy thriving establishment enveloped us. Love at first sight, for sure.

It only got better from there. The husband wife team, Lance and Lisa, have taken an 80-year old establishment and blended its history and importance to the community with an infusion of their creativity and energy. Lisa told us that they bought the recipes with the shop, and their first commitment to their new neighbors was to continue the exquisite caramel rolls and perfection of a buttercream cake icing recipe. Lance shared how couples bring in their wedding photos of cakes made in this same building 50-years ago and ask them to recreate them for their golden anniversaries. And of course, grandfathers bring in the next generation for treats from the special spot their grandfathers took them. Tradition thrives hand in hand with innovation, like Lisa’s artful fish cookies and vanilla bean cream puffs.

Yes, we caved in a split a caramel roll. Hey, our cleanse had ended that morning at breakfast.

Lance and Lisa understand branding and promotion too, and combine it with community. Not only do they have in local artists, musicians, and authors several times a week, but Lance is famous for pulling a doughnut from the case–whichever type moves him at the movement from their incredible variety–and walking out on the street, where he waits for the person to walk by who matches the doughnut. He then says to them, “Hello. I’m Lance from City Bakery, and this is a Random Act of Doughnut,” and hands it to the startled recipient. He claims he never fails to see that person later in the shop, and most of them can’t believe that of all the doughnuts in the case, he picked exactly the right one for them.

My coffee-newbie husband ordered a cappuccino from former Washingtonian Lance, and asked for a large. Lance schooled Eric on the making of a cappuccino–two shots of espresso, and the correct proportion of milk. “If anyone sells you another size, they’re making a latte and calling it cappuccino. Now, if you want more espresso in it, I can add shots.”

One of their employees was from a fourth generation librarian family, only her older sister had beaten her to the profession. She made up for it with avid reading. Another employee shared that he was leaving for college in North Dakota in a month, and his parents were selling everything and leaving on an indefinite RV trip, their longtime dream. They were all great, but how could they not be in this haven Lance and Lisa had created?

Because of the atmosphere, and because the staff pointed all patrons in our direction, this event would have been a success even if no one we knew had come. In fact, one of the patrons they sent to us worked at the indie book store down the street, and they’ve now ordered all my books from Ingram (yay!). But we’d hit the “love” mother lode, and my “mom” showed up with all three of her sisters–one of whom drove in from Fargo and another from Wahpeton–and a passel of their friends, all of whom had already read at least one of my novels. We had a ball. Eric told me later that they not only bought the Katie & Annalise series, they bought second sets as gifts for friends, and my other books too. What a way to end the tour. 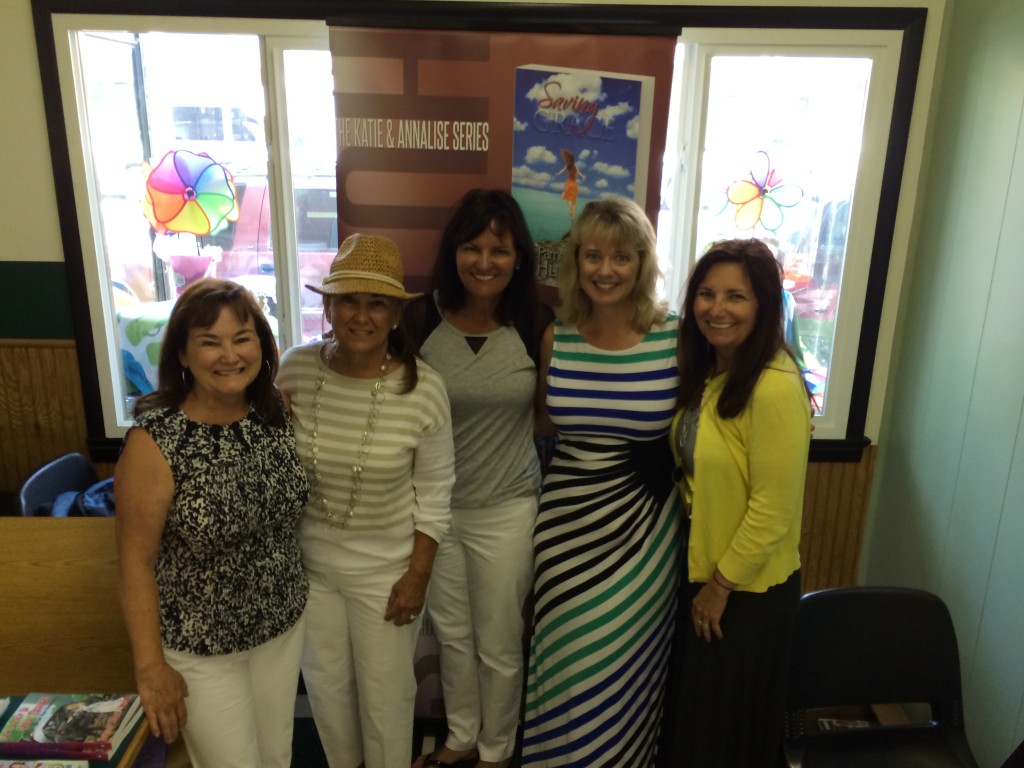 Four sisters, and their adoptee. 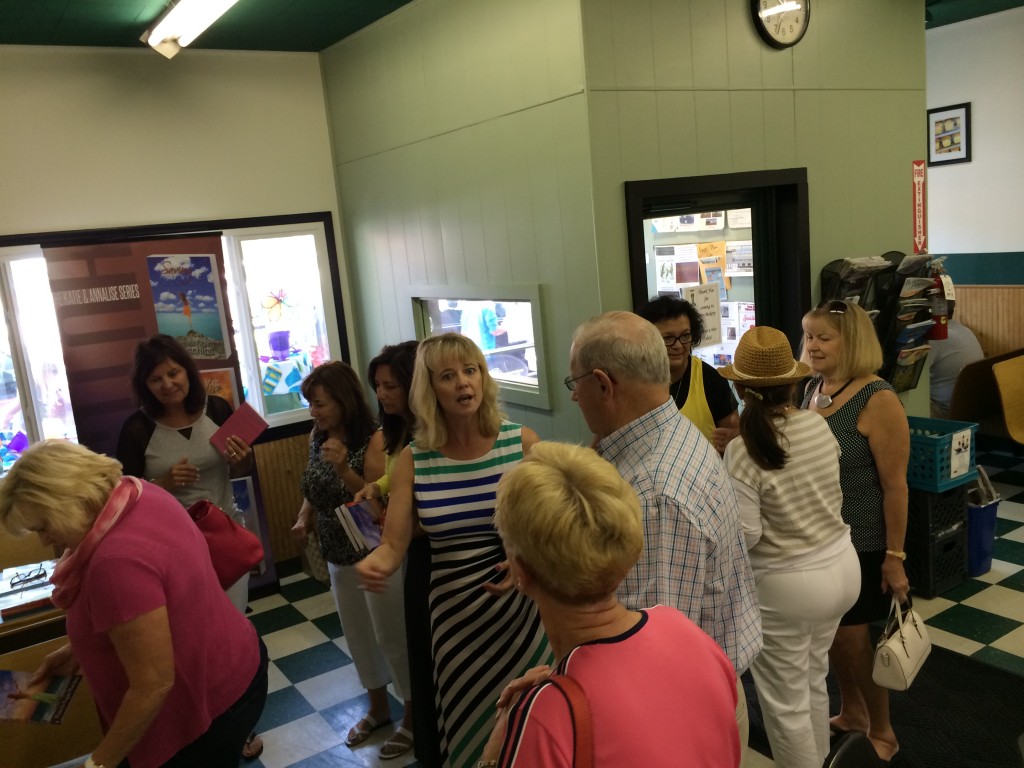 I am happy to report that these people all bought baked goods and coffee in addition to books! 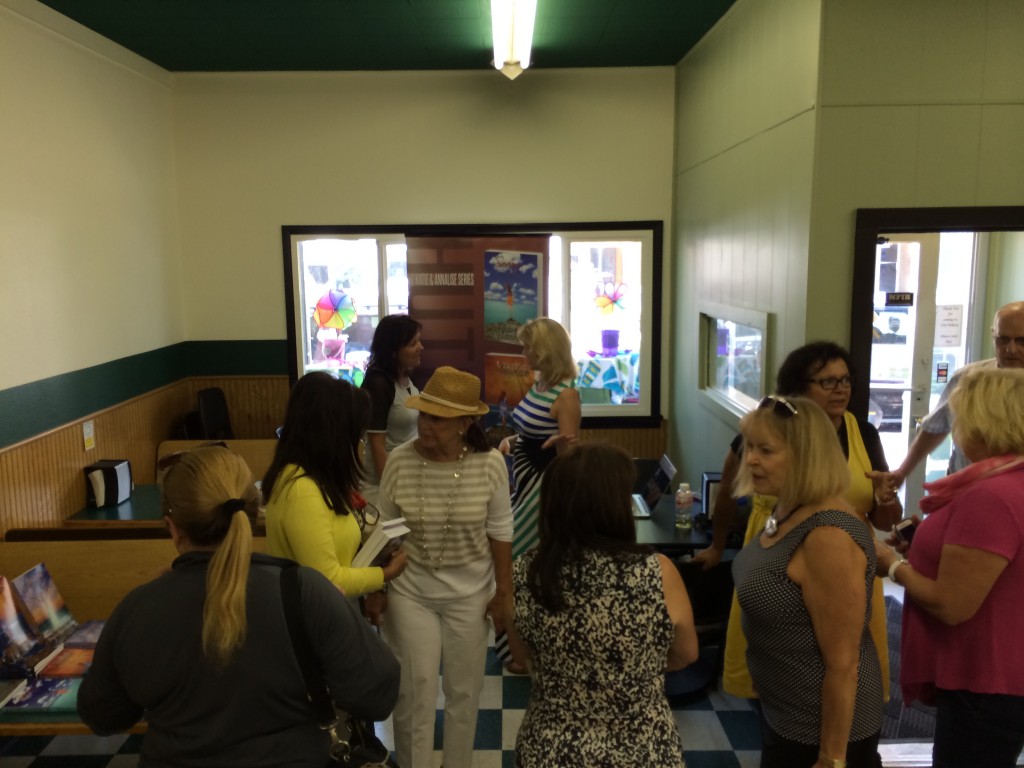 One of those rare and wonderful moments for a real heart-to-heart/connection with someone dear, in the midst of chaos. 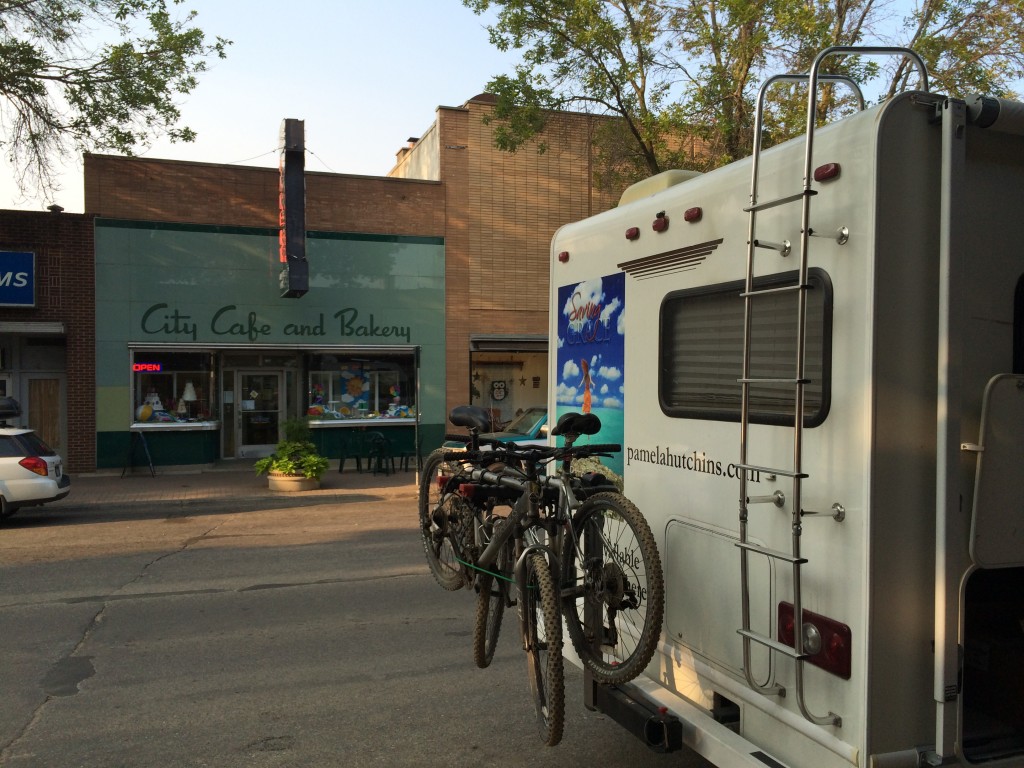 The best was yet to come, though. All that remained for us was two days of driving and about 15-20 library stops. A giant weight lifted from us and like magic the fierce lake winds dropped. We spent the afternoon cruising Otter Tail on a pontoon boat with my “parents” and playing in the 71-degree water. It was one of those days where you can’t stop talking, and each story leads to one from someone else. We laughed, and laughed. And I felt like I had come to a home I never knew I’d had. A gorgeous home.

We took notes and pictures of elements we wanted to emulate in our new house, like their postal closet for package drops on the patio when no one’s home, their baseboards, windows, and Thermidor cooking center. We lusted after one-of-a-kind elements, like their stone fireplace with a 600-pound rock 20-feet up the interior chimney and their hand made staircase bannisters, made from branches that had blown down from the tops of the oldest pine tree in North America during a storm. 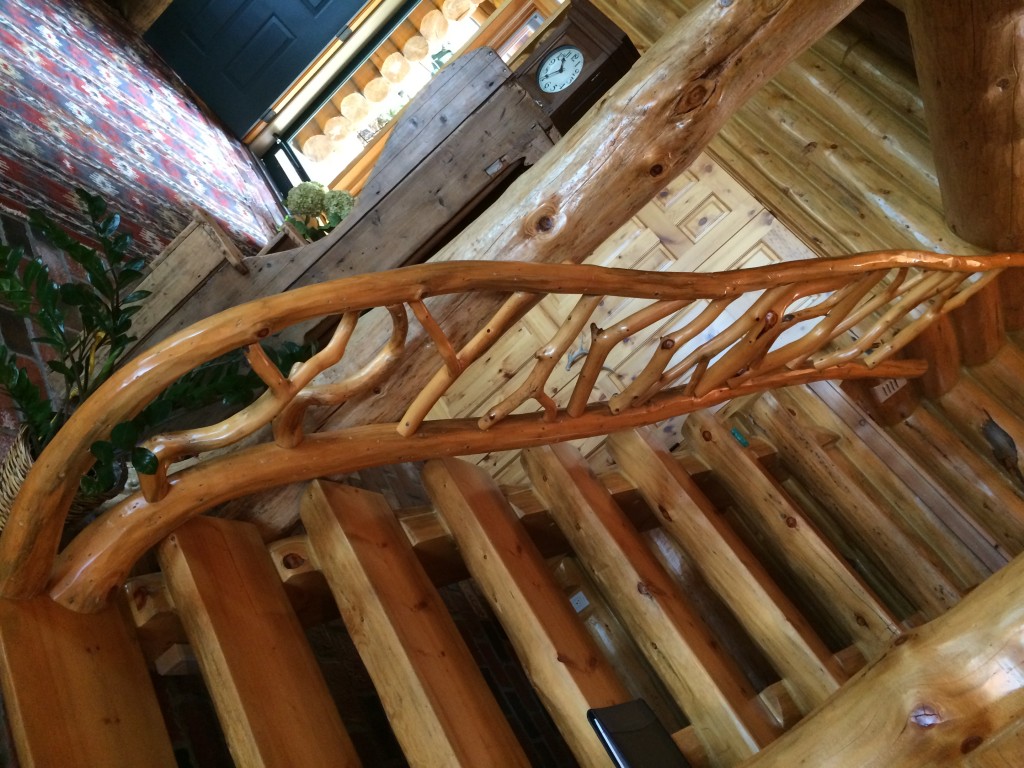 The “wood guy” chose every log and where it went and next to which other one, inside and outside their house. The wood spoke to him, and when he saw their finished stair case, he told them he had four branches for their bannisters, that would be right only in this house. They were the perfect length, with perfect curvature. Here’s one of the bannisters. Wow, huh? 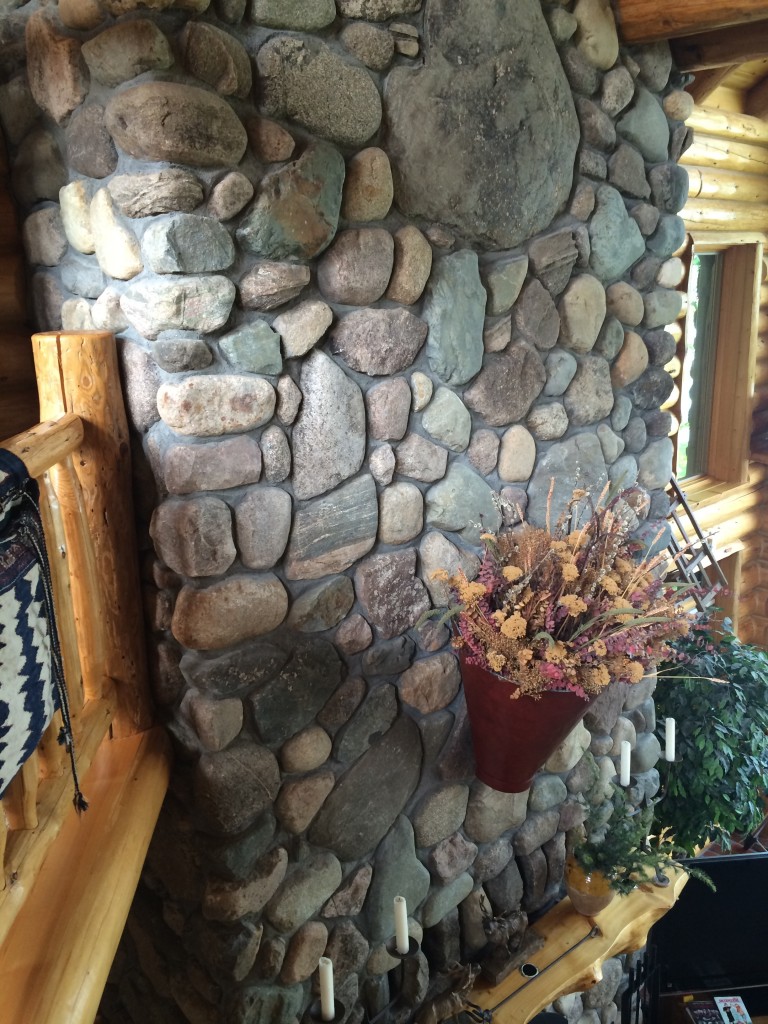 It took the stone masons two tries to get that rock into place. The first ended in it crashing to the floor, but luckily the hearth and floor weren’t finished yet.

We braved the MN flying insects for dinner outside, and it was exquisite. All too soon though hours of of conversation later, it was time to turn in, and get ready to leave the next morning, on the first of three legs of our long journey back to Houston.