From idyllic lake visit to the first of two marathon driving days, it was an abrupt shift. I wanted to minimize our drive time and streamline our departure for the next day. While this day would be the longest joint driving/library day we had left, I had to drive on to Houston the next day after picking up a new load of books and dropping Eric in Dallas, so I would have the longest solo day since Eric’s ultra-long drive to the Grand Canyon. I had booked an RV park in north central Wichita, KS, but our route was along the east side and straight south, so I had asked Eric the night before to find a park on the east or south side, preferably the south. He said he found one and would call once we were underway.

We moved quickly out of Minnesota, through our small piece of North Dakota, then spent the morning and early afternoon in South Dakota. We didn’t have any libraries our first few hours, but we did notice a startling trend immediately: road kill. Specifically, raccoon road kill. Yeah, there were lives animals, too, (a gray fox, some deer, and a pheasant) and other dead ones (a deer and a red fox), but OMG there were a lot of dead raccoons. When we saw the third one we started keeping count. 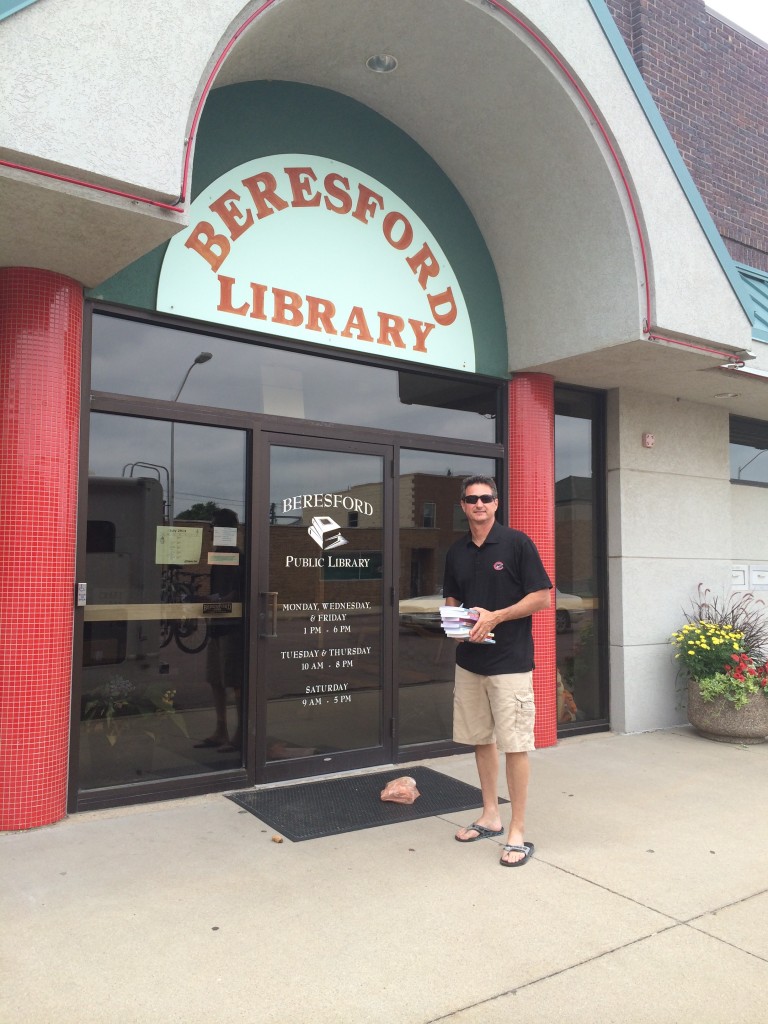 Eric wore different shorts today. Our first stop was Beresford. I zoned out in Elk Point at our second stop and forgot to take his picture.

After we stopped at our first library, I got ready to map us to our next one on Eric’s iPhone, with Siri. I decided it was time to get the address of our new RV park so I could build into our overall map, which I keep open on my laptop. It shows our complete route with all our stops for the entire day. Eric gave me the address. I input it. I let Google Maps do its magic, and it redrew our map.

“Whoops, honey, can you give me that address again? It must have typed it in wrong.”

He gave it to me again. I’d had it right the first time.

“Huh, well, this shows our RV park west of Wichita in a little town called Goddard.”

“We’re driving down the east side of town, going south.”

“I know, Pamela. Wichita isn’t a big town. This is the nicest park I could find, and it won’t make any difference.”

In my heart, I knew what small potatoes this issue was in the big picture of our marriage. In my mind, I also knew that if I’d wanted it done a particular way, I should have done it myself or double-checked earlier in the process. But neither my heart nor my brain are tied closely to my mouth. “I had a perfectly nice park north of town, one I’d stayed at before. I am not sure why we canceled it to move further away. Your park is practically in Utah.” Then I laughed, to show I was joking, which I wasn’t.

Eric laughed to show he was joking, too, which he wasn’t either. “Good thing it won’t make any real difference then.”

I nodded, zipped my lips, and pressed start so Siri could deliver us from Beresford to Elk Point, SD. No need to let things get testy between us. We’d done four weeks on the road in a 24-foot RV with nary a significant ugly mood swing. I just stewed on it instead.

Miles zoomed past. The dead raccoon count mounted. A few hours later, we arrived at the “Sloan Public Library.” It was awfully cute. Homey even. And what was that word “Lofts” below the name on the building? 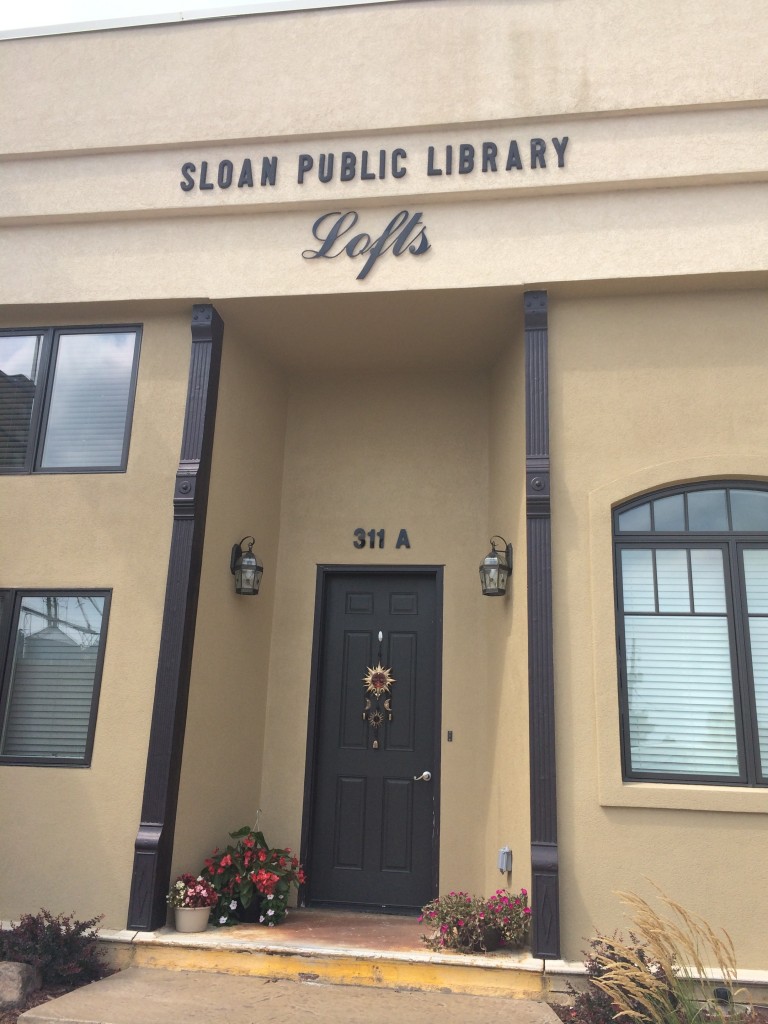 What the heck? I checked the address. It was correct. I regoogled the library. I got the same address. I went to the library’s Facebook page. DIFFERENT ADDRESS. 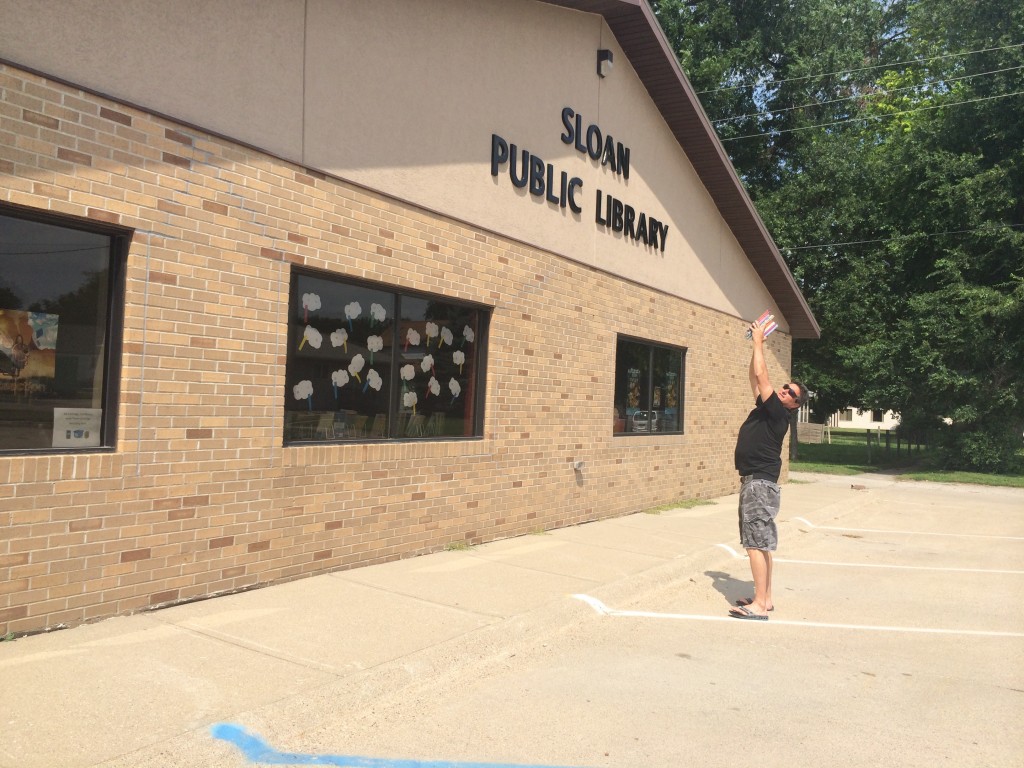 The new shorts didn’t last long. Eric changed them after he dropped his lunch on them. Back to camo.

At this point, I succumbed to sleepiness, mid-day. I was fighting a cold . When I awoke two hours later, we were stopped behind THE longest train of all time, outside Mondamin IA.

“What’s the raccoon count?” I asked. It had been twelve when I’d gone to bed, after 6.5-hours of driving.

“There were nine more while you slept,” Eric said.

He raised his eyebrows without looking at me. “Something bad is happening. Something is killing all the raccoons. Like a UFO. Invasion of the Raccoon Snatchers.” 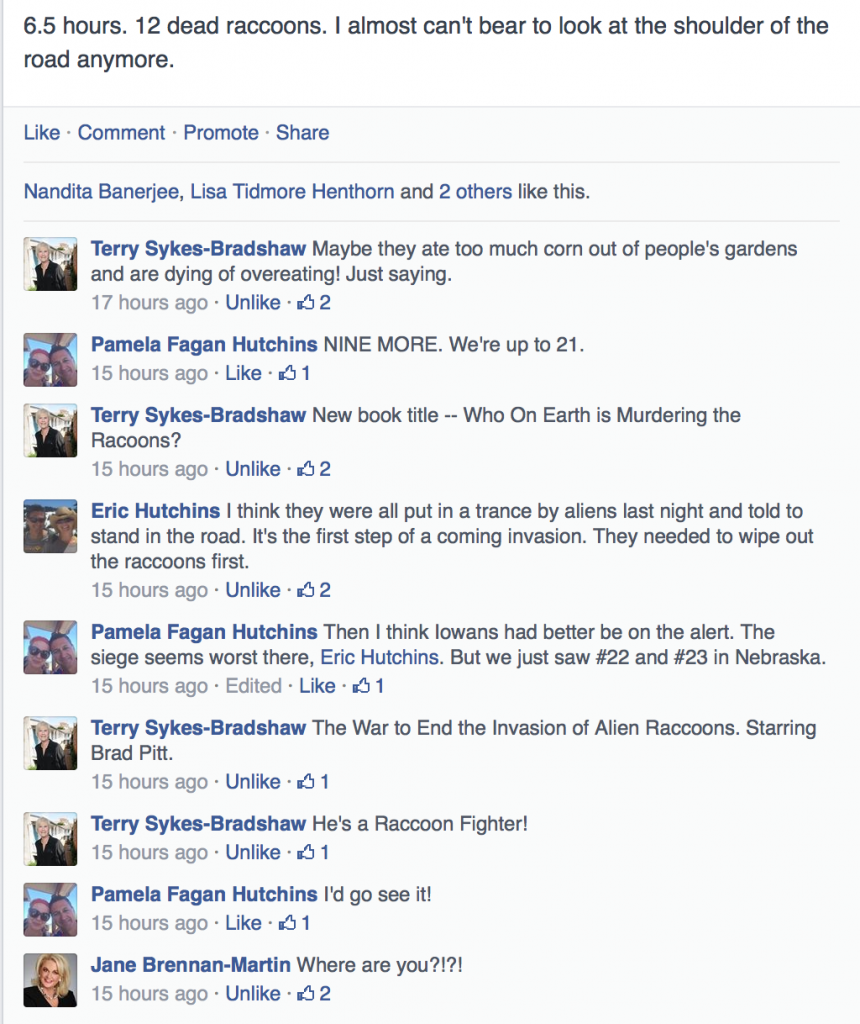 The raccoon deaths continued in Nebraska, but at a slower pace. 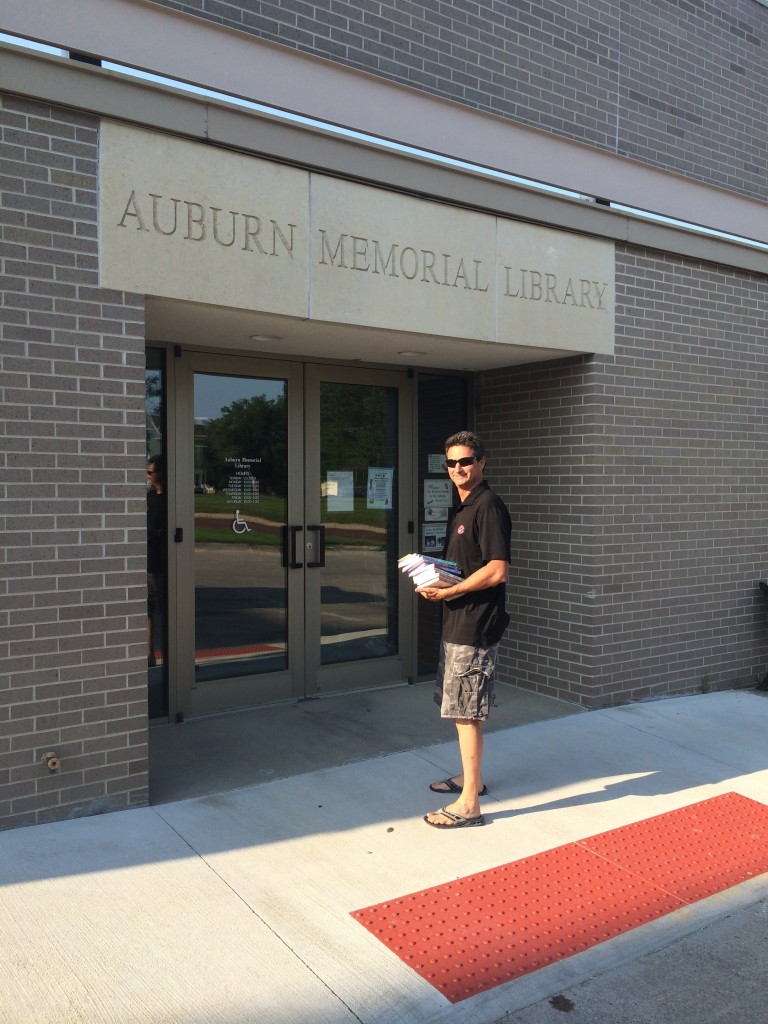 When we reached Dawson, NE, we encountered our first dead library. 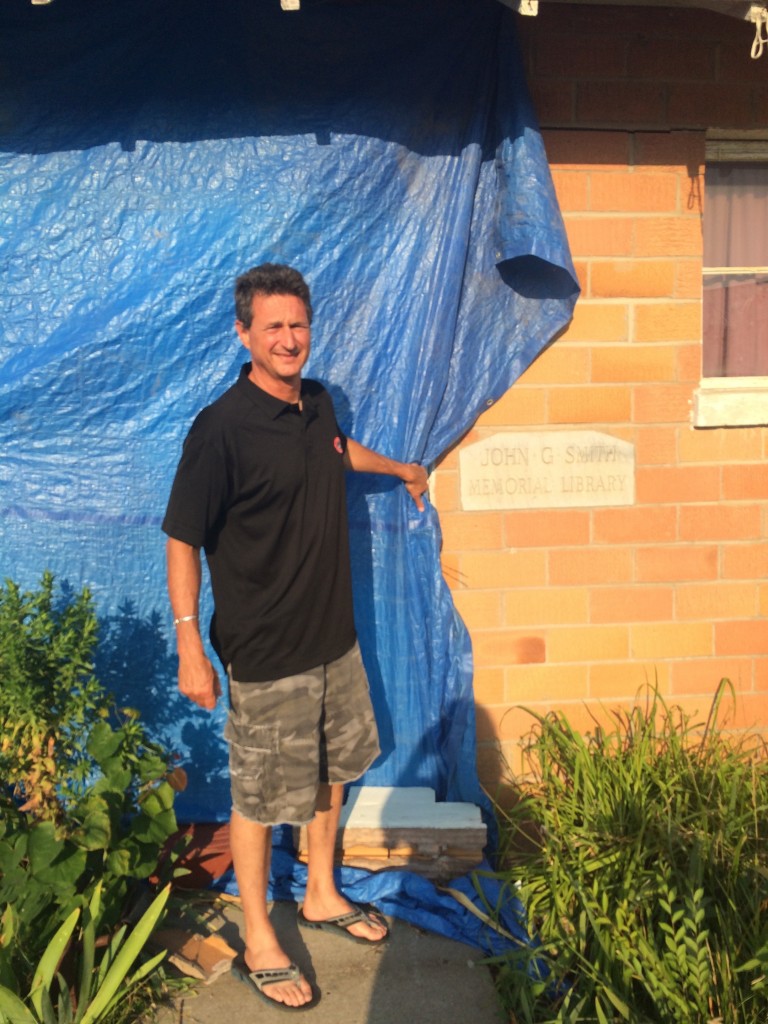 The roof had fallen in.

We had no cell service in Dawson, so if the library had moved, we had no way of knowing. Eric even walked into the Fire Department’s open bay looking for someone to ask about it, but with no luck. We left a stack of books next door in the vestibule of the post office with a card for the “Dawson Nebraska Librarian” on top. We had to hope the library had found a new home, and our books would found it. 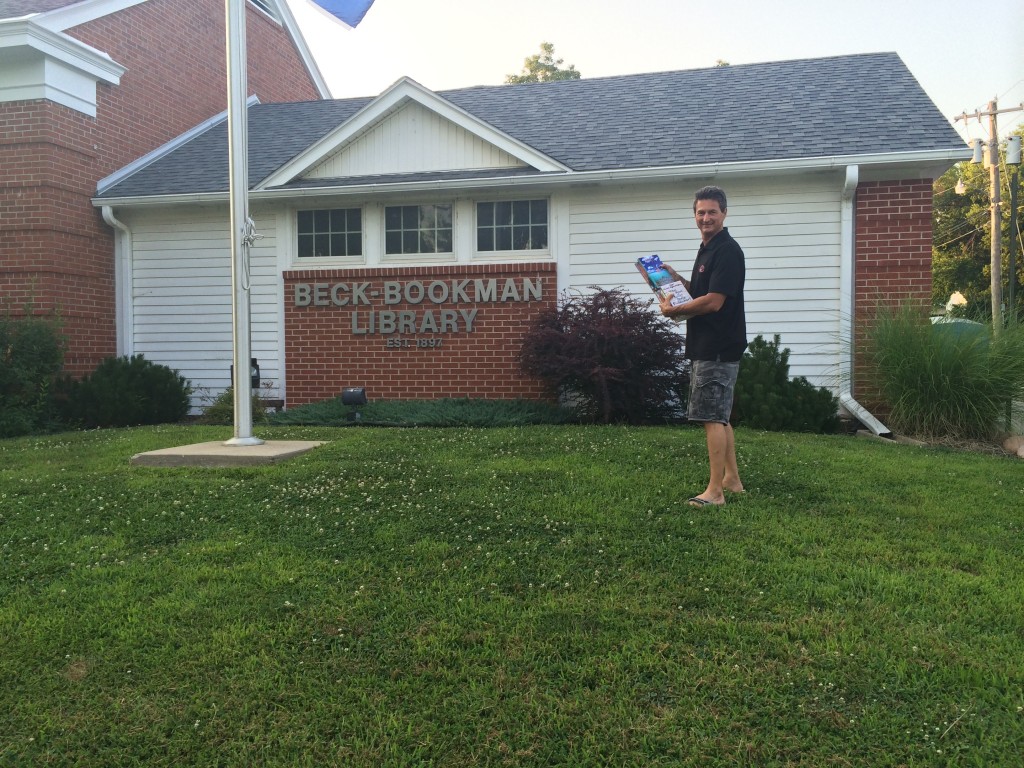 Established in 1897. Wifi free, and it must’ve been good, because there were people sitting on a bench outside it after hours, working on their laptops.

This was our last library drop.

“Are you hungry?” Eric asked me.

“Yeah. We’d better eat here, because I’m not in the mood for Western food.”

“You know, when we get back to Utah.” I was, of course, referring to our RV Park.

He cut his eyes at me, but he was smiling. “It’s not that far west.”

When we reached Wichita, we took a sharp right, a 90 degree turn to the right.  Shortly thereafter a sign told us we’d reach Goddard in 11 miles. I started to say something but Eric cut me off.

“What? I wasn’t going to say anything about it being ELEVEN MILES WEST to Goddard.”

The delicious taste of being right was far sweeter than staying in an RV park on the correct side of town. “”I’m sure it’s going to be a lot nicer than the park I had us booked at though.”

“There’s going to be one more dead body on the side of the road if someone doesn’t shut up,” he said, through a big grin.

By then we’d reached our RV Park, and it was a Man Camp for workers. Not super sketchy, but not super nice either.

“Hey honey,” I said, “Do I need to reset my alarm to Mountain Time or Pacific Time?”

We’d left MN fourteen hours and 26 dead raccoons ago, and all I wanted was a comfy bed and my husband’s warm shoulder to rest my head on.

Which is what I got.