Bruce Wayne's Ain't Got Nothing on Clark Kent

For those uninitiated to my blog, let me tell you about our 19-year old ADHD son, who we–with weary affection–call Clark Kent, because he thinks he’s Superman inside his four-minute rolling snapshot of the world. I wish I had his re-set button so I’d never think again of past oogies and future deadlines. Clark Kent also pegs out at high-functioning and “Aspergers” on the autism spectrum, which you’d know as soon as you conversed with him. Super genius/super aggressive/super unique 🙂
Nearly two years ago, Clark Kent did a poor job parking in a public lot. When he returned to his Tahoe, someone had drawn this homage to his skills on it (DON’T LOOK ETHEL): 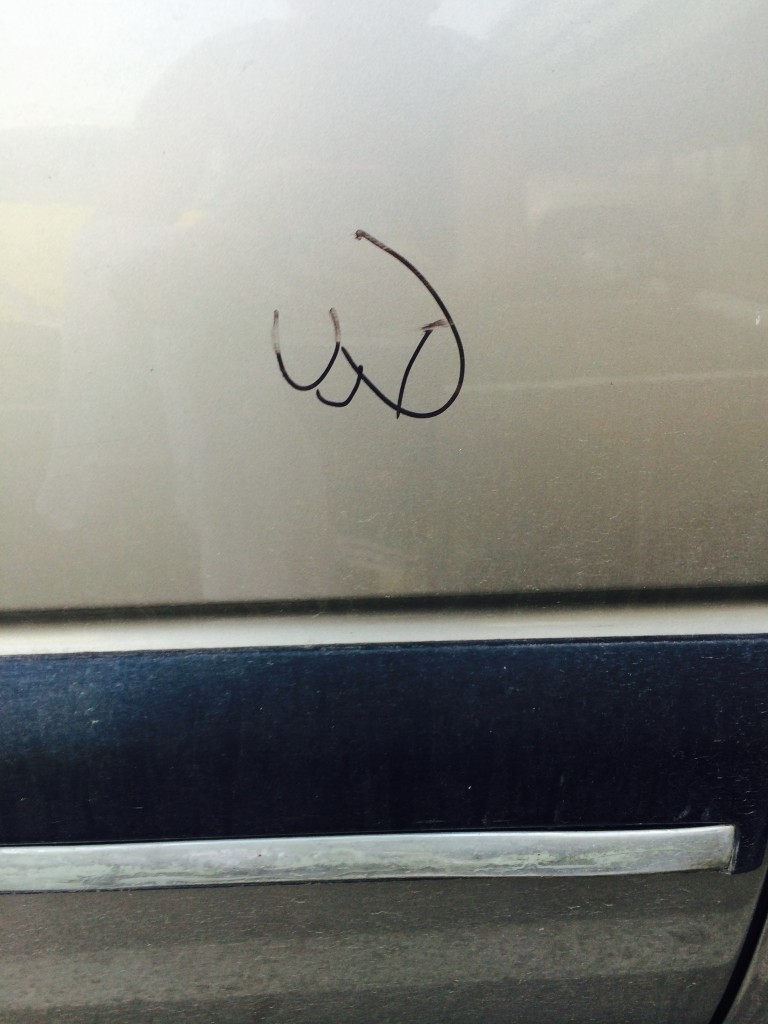 In Sharpie. Which he said he couldn’t clean off, although with Clark Kent you can never be sure if he really ever tried. Because if someone doesn’t redirect his attention to it, it ceases to be within his reality. That four minute rolling snapshot of life and all being what it is. As much as it galled us, we could not clean it off for him. ADHD counseling 101. Help them do it, don’t do it for them. So we helped and helped and helped, but he never had it removed.
After a few months of looking at it/helping, awesome parents that we are, we christened it the Dickmobile, which is kind of like the Batmobile, only Bruce Wayne ain’t got nothing on Clark Kent. Hereinafter I shall refer to it more delicately as “the D-mobile.” We thought calling it this to Clark Kent might step up the humiliation factor a notch and get him to clean it.
It didn’t. Oh, Clark Kent. Oh, D-mobile.
The D-mobile is the keeper of mysteries. In it we found a package never mailed with a skirt for return that hadn’t fit my mother-in-law. This solved the mystery of why my card had never been credited the price of said skirt. In the D-mobile we found a mini-blow torch. At first we panicked. We watch TV. We know all the wicked drugs these are used for. Then we realized it was just the one he’d borrowed for a school project from his father Edward last year and never returned. The D-mobile has coughed up lost passports, a whole summer’s worth of undeposited paychecks from lifeguarding, old textbooks, silverware still lodged in molded, unidentifiable food substances, stiff, unwashed underclothing, and–my personal favorite find as the Mom who had staged a “raid” on the contents of the D-mobile one fine spring day–used barrier contraceptive devices. Sadly, disposal of this last-mentioned item must have fallen outside of Clark Kent’s four minute rolling snapshot. Lucky me. But it was oddly comforting at least to know that little Clark Kents weren’t in the offing, at least any time soon.
So here I sit, nearly two years after the parking lot artist rendered the masterpiece on my son’s vehicle. Outside our front window I can see the D-Mobile, its D still emblazoned on the passenger-side door, proudly displayed for our entire elderly, Jewish neighborhood to see. It’s there when Clark Kent goes to work, and it’s there when he drives to classes. It’s even there when he parks at his grandparents’ house. The only place it doesn’t go is inside his perception, as he happily forgets it until the next mention.
I should probably be embarrassed, but, honestly, I think Clark Kent’s rubbing off on me.
That’s all I’ve got.
Pamelot