What's more expensive to lose than a black leather jacket?

Once upon a time I gave my sweet husband a hard time about losing black leather jackets. You can read about his foibles HERE. But before I teased him about his propensity for donating his clothes back to the universe, I teased him about losing glasses. Yes, you can also read about those travails HERE. So Eric lost four black leather jackets in eight years, but who’s counting? He hasn’t lost a single one in at least two years. Maybe a little more. I think he’s done losing jackets at $200 a pop.
How do I know this? Because now we are back to losing glasses. Yes, Eric, the man with the brilliant brain for all things chemical and engineering, has no brain for keeping his spectacles or his coats.
But the stakes are higher these days. As Eric’s eyes have—how shall we say this delicately?—aged, they have become progressively more expensive. In fact, now that he wears progressive lenses (OK, I do, too), because he can see neither near nor far, they are most expensive of all. For the younger of ye who know not what awaits ye, that’s about $750 a pair.
In July, Eric confessed he had permanently misplaced his progressives. He couldn’t stand it, but he had to replace them because it’s really embarrassing when you’re reading your speaker’s notes to give a presentation with your reading glasses, then look up and can’t read your slide deck. So he ponied up the big bucks and bought an identical pair of glasses to the ones he’d abandoned in parts unknown.
They came in, all was well, and off he went to Canada for a week. All went fine until day three when he left the brand new progressives somewhere . . . who knew where . . . just not where he could find them. He searched, and he searched, and he searched. Rental cars, hotels, restaurants, parking lots, and all the myriad of places they could have run off to at the client site.
No luck.
Right now he awaits notification of the arrival of his third $750 pair of identical progressive glasses of 2014. Guess how many were covered by insurance? NONE. Because he’d already used up all his insurance money for glasses replacing the stinking pair of reading glasses he also lost 🙂 ! But ho, they were only $250. No biggie. (snort)
They say bad luck comes in threes, so I’m thinking ‘buy three sets of replacement glasses’ and you’re done. So we move on, again.
But does that mean we move back to black leather jackets? Because—and I kid you not—look what I bought him this year for his birthday? 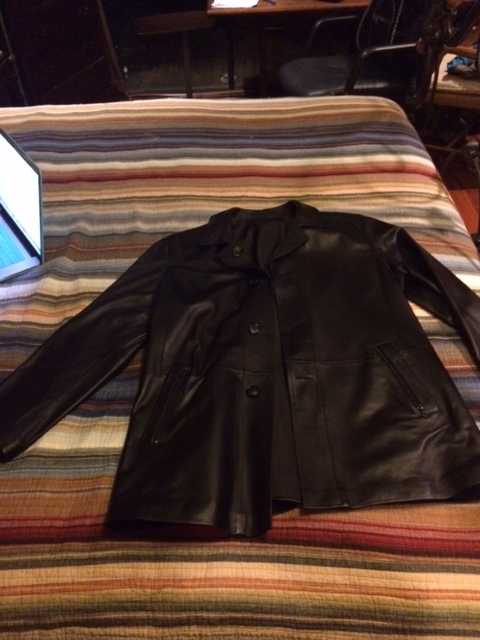 I think this beauty’s days are numbered.
That’s all I’ve got.
Pamelot