What Eric almost sold at the Texas Book Festival.

We had a grand time a week ago at the Texas Book Festival. Truly, it’s my favorite event of the year, even if two days under a tent signing books and chatting with readers is an exhausting kind of fun. I didn’t even take lunch breaks. That could be because this year we gave away SIX HUNDRED copies of Saving Grace, so we were pretty popular. I signed nearly 1000 books and ran my sharpies dry. 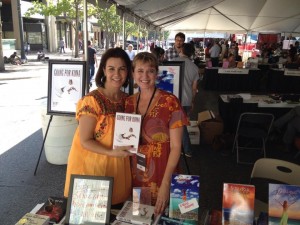 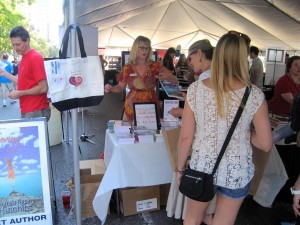 Before the TBF event started, I went to coffee with my friend and colleague, author Rebecca “R.L.” Nolen and two energetic PR by the Book women. While we were there, Eric did set-up. Readers showed up starting about an hour and a half before the festival started, so he started sales and giveaways early. I got a text from him that said he had given away two Saving Grace and sold cock. Yes, cock. I was blown away at his willingness to give his all for the cause (and his graphic language), although a little rattled by it, until he explained that iPhone was up to its old autocorrect tricks. He actually sold a Clark, as in The Clark Kent Chronicles. Phew!

We came home to a broken air conditioner in our old house, so I spent Monday and Tuesday trying to get it repaired. Eric took off for Dallas early Monday, but—awesomeness—our eldest offspring Thomas came in Monday night for a week’s visit pending his move from Miami to here in Houston and the availability of his new Midtown apartment. His cat, Kitty, is with us for three weeks while he vacations in Cali. When he’s back we’ll help him move in and start a new chapter in his life here. We are all so excited!

I was able to start revisions, finally, on Heaven to Betsy (Emily #1) this last week. I even read Chapter One for one of my critique circles and Eric. I’m pretty happy with it, so I put the unedited Chapter up as a preview for devoted fans only, especially those who have already devoured my new release, Going for Kona. You can access it HERE:

Let me know what you think of it in the comments to this post or via a reply to this email.

If you haven’t read Kona, here are two new reviews that might entice you: 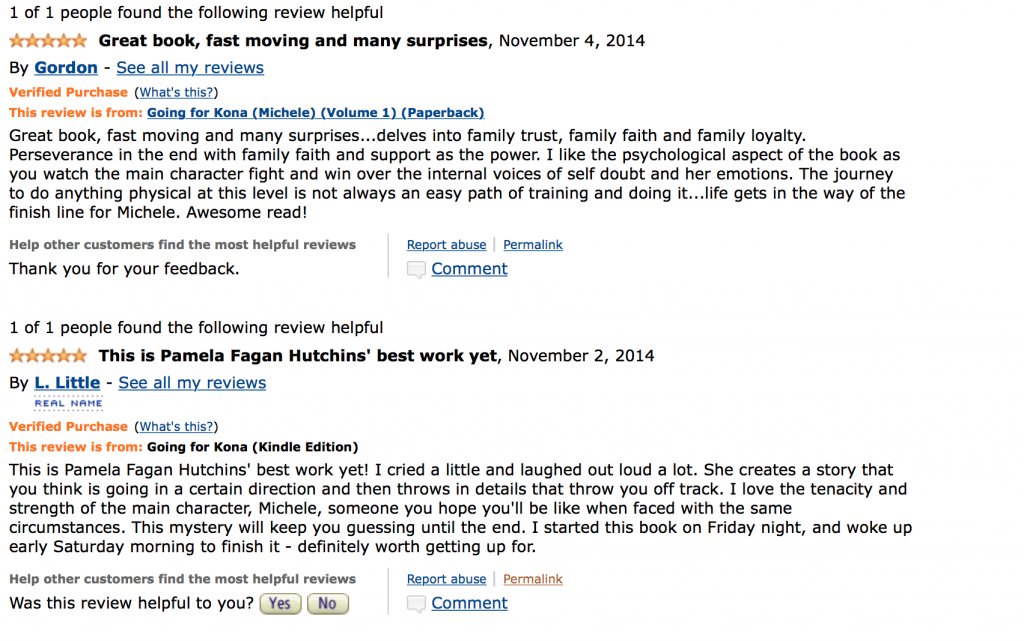 I finished up the week by chatting for a few hours at the Missouri City Library with prospective NaNoWriMo writers, which is inspiring for me too. I’m not writing a novel this month, but I did commit to finishing the Heaven to Betsy rewrite in its stead. NanNoWriMo is National Novel Writing Month, in which participants are challenged to write a whole novel of 50,000-words or more in 30 days; I’ve done it three times and used the methodology an additional two times to write novels. The last time was in September of this year for Heaven to Betsy and I wrote 62,000-words in 17 days.

This week I have a big event coming: Cooper School Signatures Author Series. Last year Jodi Picoult headlined. This year it’s Tyler Florence of Food 911. I am one of the 13 Houston-area authors selected. It’s a big chichi fund raiser and supposedly a lot of fun.

Well, it’s off to the Heaven to Betsy salt mines.