For Better or For Worse (Happy Birthday Mom!)

For Better or For Worse

Adapted from Hot Flashes and Half Ironmans by Pamela Fagan Hutchins

With permission from SkipJack Publishing 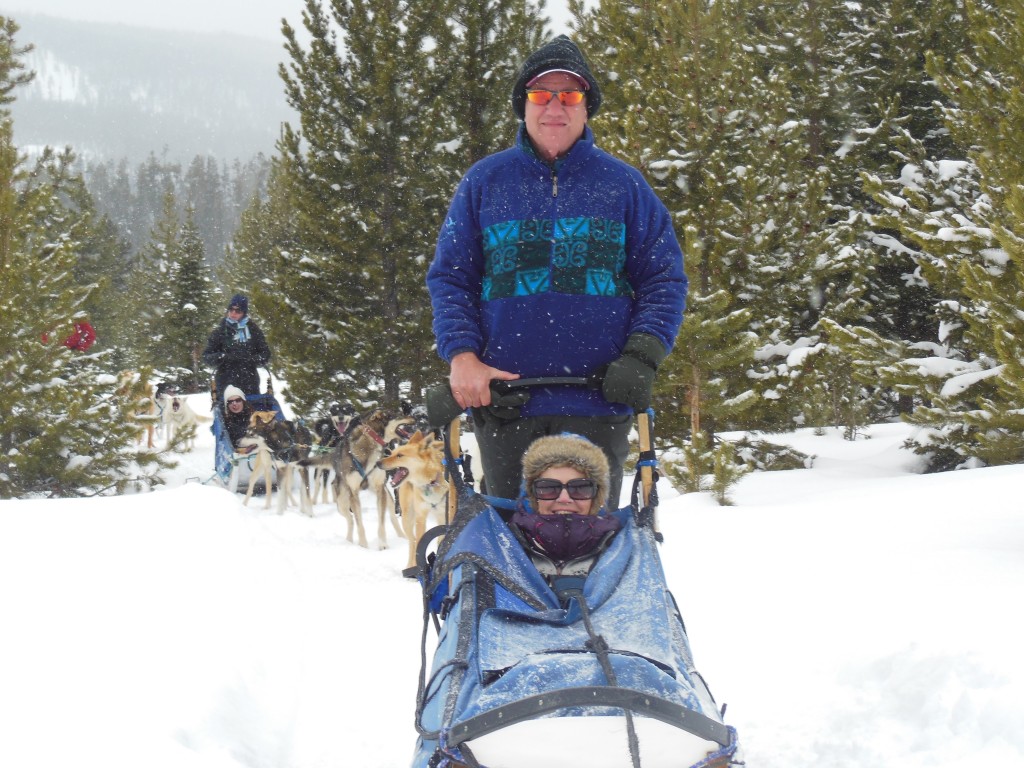 My mother dogsledding in Yellowstone with my father.

Over the voluble protestations of my Texas-born-and-bred parents, I married a man from a Caribbean island, bless his heart. Oh, what a scandalous pairing we were, to my mother at least. No one in her circle knew the first thing about his people. He had never shot skeet, didn’t care who won the annual Aggie-Longhorn football game, and he didn’t even know how to take off a pair of boots properly. Worse yet, public outings with him could be dicey. Eric was always just a breath away from getting his butt whupped by a cowboy, because he is an incurable smartass. Don’t get me wrong, my mother was unfailingly cordial to him. But in our family, cordial is for company. Love is rough and acceptance is a trial by fire.

So it came to pass that Eric and I sojourned to Fredericksburg to celebrate our second anniversary. On the big day, we drove to Llano to meet my mother for breakfast at a roadside cafe, because that’s what all practically newlywed couples do on their anniversary, right? Anyway, we were in the heart of Texas deer hunting country, and it just happened that we were smack in the middle of deer hunting season. As we drove into town, Eric put on his thickest, most sarcastic drawl and estimated the IQ and body weight of each thermal-camouflage-clad, beer-bellied hunter we passed. He kept humming some dueling banjos song and talking about people who marry their first cousins.

We parked at the café, next to my mother’s gold Tahoe. Eric looked around. He turned a stricken face back to me. I knew what was wrong before he said a word.

You see, we had just finished a run and were still dressed in our running attire. I had on full length running tights, but Eric wore shorts. You know, the kind that shows 99.9% of your thighs? You see shorts like these on real runners in New York City’s Central Park. You do not see them in Llano, Texas. In Llano, real men don’t wear sissy running shorts. Hell, real men don’t run at all, in short shorts or anything else. Real men don’t need to run, unless it’s to the Allsup’s for a six-pack of Lone Star beer. They get their exercise the manly way: they hunt and field-dress deer after they poke their dogies and till the back forty on their John Deeres. (My apologies to all aforesaid real men, ‘cause I know there’s a difference between a farmer and a cowboy, and never the twain shall meet.)

“Lotta hunters in there,” I said before he had a chance to speak, gesturing towards the tiny, crowded restaurant and then all around us at the giant SUVS with swiveling gun turrets and Lazy-Boys in their sawed-off backends. I coughed to cover a chuckle.

“I think you’re a little underdressed,” I said, and this time I burst out laughing. Every person in the restaurant was wearing thermal camo overalls, except for my mom in her pink velour tracksuit, who by now was waving cheerily at us through the words “Hunters” and “Welcome“ scrawled across the front window in red and green paint.

We hurried into the bacon-scented café, Eric tugging in vain at his shorts. They were as long as they were going to get. All eyes followed us to the table, where Mom kissed and hugged us with noisy gusto.

As soon as we sat down, she asked Eric to run back to her car and get the card for us she’d left there. Well, a man doesn’t ever say no to his mother-in-law, does he? Especially one trying to overcome the stigma of his lowly birth. Eric took a deep breath and re-trod his walk of shame to the parking lot.

When he was out of earshot, I leaned in and whispered, “Mom, Eric is mortified about his running shorts.”

“Look around, Mom. Hunters. No short running shorts.” I giggled. “He feels conspicuous.”

My mother never wastes an opportunity, and the woman is quick. She turned to the nearest hunter, a healthy fellow of 270 pounds or so, 8.6 pounds of it in facial hair.

“Would you do me a favor?” she asked him.

Have I mentioned that my mother is a great source of genetic material? She is chestnut haired-charming and twinkly-eyed pretty, and all men love her. This hunter was no exception.

“Why sure, ma’am, what can I do ya for?” he asked, and damn if his voice wasn’t a dead ringer for Eric’s imitation hunter-drawl earlier.

“See that man in the running shorts out there in the parking lot? That’s my son-in-law. He is a little embarrassed about his shorts. I was wondering if you could let out a big wolf whistle when he comes back in?”

He turned to his cronies, who were hanging on every word of this interchange. He brayed a laugh, and after a split second, so did his two friends. “I’d be delighted to help ya out, ma’am.”

“Thank you sooooo much,” she said, and turned back to her menu, a Mona Lisa smile on her face.

The front door opened, sounding its bell. My clean-shaven husband with his mighty fine exposed gams stepped in.

Without hesitating as long as it would take to load his 30.06 deer rifle, the hunter yelled out, “Hey boy, NICE LEGS!”

Eric looked around slowly, hoping the hunter was talking to someone else. His face lost all color. The restaurant grew so quiet you could almost hear the steam hissing out of Eric’s ears. After a few beats, the café exploded in sound, as the hunter and his buddies cackled and whooped with laughter. They pounded the table, and one of them clapped our hunter on the back with a resounding thwump.

Eric tilted his head just enough to be perceptible and made the four quick strides from the door to our table, his naked legs eye-level as he pushed between two tables on the way. The hunter reached out and clasped his meaty paw around Eric’s arm.

He hooked his thumb at my mother. “Yore mother-in-law put me up to it. I don’t normally comment on another feller’s legs.”

My mother, nose buried in her menu again, pursed her lips hard to stifle a laugh.

“They are awful nice, though,” one of his friends said, and they all set to hee-hawing again.

Eric’s jaw dropped as he lowered himself into a chair beside Mom. He looked at me. I shrugged, and then my giggles started. I couldn’t help it. Mom had engineered loving perfection, and made it look effortless. I thought of the times I embarrassed my kids: writing a public letter to Tim Tebow betrothing him to my then-fifteen-year old daughter, dressing up as Shania Twain and signing karaoke with them as backup singers at a talent show when they were too young to know how horrified they’d be later, the thumb dance I did at the grocery store when my tweens pestered me to buy them garbage. As good as I was, I was a pale imitation of the masterpiece, this woman who had just so clearly announced to the world that she took my husband for her son-in-law, for better or for worse.

“The French toast looks good, don’t you think, Eric?” she asked, and looked up at him with a beatific expression.

It is possible that Eric now finds this story humorous. At the time, he may or may not have planned the slow and painful death of his mother-in-law in the near future, although you’d never have known it then. Let’s just say that when we drew up the plans for our someday house on our property in Nowheresville, he didn’t include a mother-in-law suite.

But he laughed that next Christmas when she gave him a longer pair of running shorts.