So you guys have waited oh-so-patiently for tales of Bora Bora, and I am finally recovered enough from the Bora Bora crud to share them with you. I am delighted to report that the crud I picked up was only a cold that turned into bronchitis, unlike Lindsay Lohan, who last month contracted Chikungunya in Bora Bora. In general, I’m of the opinion that it is always good to be able to differentiate one’s self from Lindsay Lohan in whatever way possible.

Bora Bora rocked, hard. Best trip ever. Five days of fairy tale vacation. Unfortunately, it was clear that I was succumbing to said crud by day four, which was also the day of Eric’s ultra-romantic wooing of me through a surprise Polynesian vow renewal ceremony on a private motu (island) beach, said ceremony conducted by a rotund-to-the-point-of-square Polynesian gentleman, half in Tahitian and half in English. Our officiant wore flowing robes in a South Pacific print with his hair pulled back and accented with a ring of long saw grass and some red beaded, shelled . . . adornment . . . that I couldn’t really identify. He  reminded us of John Belushi, and admonished Eric that a man only has one heart, so if he gives it to one woman, he can’t chop it in pieces and spread them around to other women. I liked that little tip. If anyone’s going to chop Eric’s heart into pieces, it’s going to be me, if he tries to spread himself around. Just sayin.

The big surprise of the ceremony came before it when the resort employees came to escort us from our thatched-roof, over-water bungalow to the boat. They were carrying two sarongs (or, as they call them in Tahiti, pareos). The woman instructed me to change into mine inside the bungalow, and the young man took Eric outside to don his, and nothing else. Eric doesn’t even take his shirt off on the beach, so he was a leetle bit concerned about the situation, but he didn’t balk. 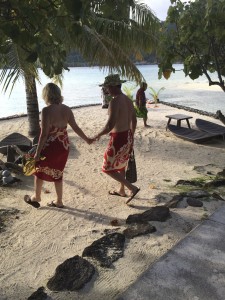 Plus, John Belushi gave us leis to wear once we reached the beach. The frangipani petals provided Eric with the modesty barrier he was looking for, but I could still see his pecs, which was what I was looking for. Everybody happy. 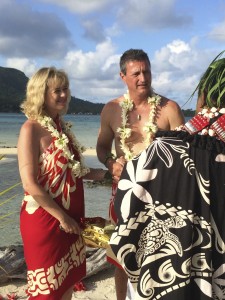 Note that he is wearing a black pearl pendant that I gave him that day. He’s always worn something around his neck, and it turned out that I found the perfect something for a surprise vow renewal day. Anyway, after the ceremony we enjoyed the sunset and then the best meal of our trip (I had lapras and he had swordfish), which was interrupted by my blissfully happy but pitiful request to go back to our room, because I felt like hammered poo. 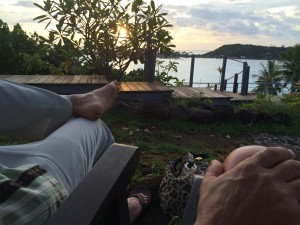 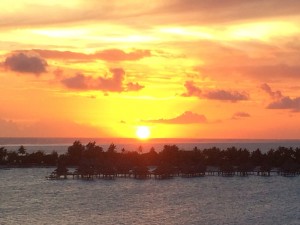 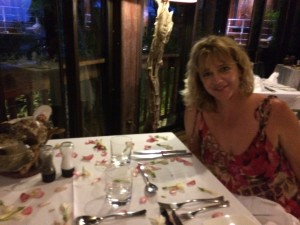 We returned to find the staff had decorated our bed, which was super sweet but completely wasted on me because I had a fever and was slightly delirious. 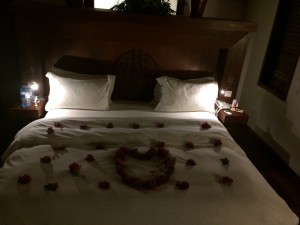 I rarely fall asleep before my husband, but on this night, I did. Fully clothed in my pareo, and drooling.

The following morning started our last day on Bora Bora. Eric hailed a  taxi to take him to a pharmacy. I needed cold meds, stat. As per his usual style, Eric befriended the (enormous) Polynesian woman who owned and drove the cab and her (much smaller) sister. They fell in love with him when he told them one of the things we’d most enjoyed about our resort (the Sofitel Marara) was Sunday brunch attended by local families who stayed on for their kids to play in the pool. It turned out that the Sofitel is the only resort on Bora Bora that even serves locals. The others won’t because of an assumption that the guests don’t like it. If they’re right, I’m embarrassed to be lumped in as a guest of a Bora Bora resort. However, we were thrilled we’d picked the one resort that didn’t cater to these kinds of attitudes. (Also, the two women falling in love with him might also have something to do with his olive skin and chiseled face, and the aforementioned pecs. Just a possibility.)

The trip was successful and Eric came home bearing a bag of drugs as well as Tahitian phrases written on an envelope, the first of which was “I love you, my sweetheart.” The sister had taught school for years, and she wrote it out for Eric to be sure he got it absolutely correct when he said it to me.

He put a hand over his chest and said, “Ua here vau ia oe. Ta’u here.”

Ah. Isn’t he sweet? He taught me how to say it, too, and we took turns butchering it and several other Tahitian and French phrases we (almost) learned on the trip.

While Eric had been gone, I had tried to sleep, unsuccessfully, in part because I was dying, and in part because our air conditioner quit working and it was a dead calm day so I couldn’t even open the windows and use the wind. It was summer in the South Pacific, and hot enough to fry fish on the boards of our deck. I was lying sans clothes under the ceiling fan and trying not to expend a single unit of heat-producing energy. Upon discovering this condition (the AC not working/wife au naturel) Eric knew that any attention towards me would be futile, so he went outside to take a look at our air conditioner, letting the door shut behind him. A few seconds later I decided that it might be cooler under the shaded portion of our deck , where I could catch a little breeze, if there was any at all. What’s a private bungalow deck for, anyway, if not for naked women to get out of the heat? I slipped outside, and the door clicked shut behind me.

“Nice look,” Eric said as I stumbled past him for the deck chair.

“Uh,” I replied, and collapsed in a heap. There was a breeze out there. Not much of one, but it cooled my sweat, so I wasn’t complaining.

“We should turn off the AC for awhile. I think it just froze up when we left the door open after breakfast this morning.”

I lifted a wan hand in acknowledgement.

“You want to sit down in a cool shower? That might help,” he suggested.

And that’s when it hit me. Eric had gone outside expecting me to remain inside, where I could open the auto-locking door to let him back in, something we’d done multiple times a day. I had come outside keyless (and everything else-less), not even thinking about how to get back in, probably because I had no detectable brain activity. Now, without keys, we’d be stuck on the deck, and while it was private, there was no way to enter our bungalow without exposing me and my “nudidity” (as Eric sometimes calls it) to whomever would come to our rescue.

He shielded his eyes and looked out over the water with only his profile to me. “You don’t have a key on you?”

Duh, I almost said. Where the hell was I gonna put a key—no pockets. And I’m not a kangaroo, or smuggling drugs for a coyote across the Mexican border.

Eric turned his head toward me and surveyed my sprawled form. “You’re going to make somebody’s day looking like that, honey. They’ll be talking about you in the employee lounge for days. Weeks even.”

I glanced down a flight of stairs to the lower deck and ocean. I waved a hand. “I could get in the water.”

“I wouldn’t get in there buck naked,” Eric said. “Haven’t you heard about the little fish that can swim up your urethra?”

He nodded. “Just don’t tinkle and maybe they won’t get you.”

As I started to protest, he said, “Just kidding. They live in the Amazon river, not here. And plus I’ve got this.” He reached into his pocket and pulled out a room key. My heart leapt, and he shook his head, like I wasn’t right in mine. “I wasn’t going to make you get up out of bed to let me in. You’re sick.” He grabbed my hand and pulled me to my feet.

“La ora na,” a male voice called out from below us. We looked down, and I saw a young Polynesian man in a black and white outrigger canoe passing under our bungalow.

I whimpered, and Eric shouted, “Hello there.” So much for privacy.

Eric opened the door and I scrambled in behind him to the bathroom where he turned on the shower. I crouched under the spray against the wall and smiled as cool water streamed over my warm face.

Eric crossed his arms, watching me. “I’d have given you my shirt you know.”

Given his shirtless phobia, this wasn’t an entirely insignificant offer; still, it only came after I’d stood outside naked for five minutes. I dipped my head forward out of the water. “When, exactly?”

He grinned, sheepish. “Don’t fire until you see the whites of their eyes?”

Men. I wasn’t about to complain though. Every fifty-ish or eighty-ish or even thirty-ish-year old woman needs someone in her life who’d rather see her naked than offer her a shirt, even when she’s got the Bora Bora crud.