In the summer of 2014, Eric and I did a 30-day “America the Beautiful” book tour of the Western and Northwestern states. We met a couple in Mount Hood, OR who had spent six weeks doing medical service on a Native American reservation in Wyoming. They greatly admired the sheep herding dogs, which were Belgian Malinois, especially a litter of pups. When the puppies were twelve weeks old, the sheep herders showed up with shotguns to shoot the ones they’d identified as “chasers,” as in chase those that would chase and kill the lambs. The ones whose prey drive was too high for herding. They would keep the others. The couple intervened and adopted a male Malinois pup, and we met him on that day in Oregon.

This dog bristled with energy, but even more, his eyes shone with intelligence. It was like conversing without words. Sure, he was a little hyper, but he came by it honestly. He’d been locked in a room to control his alerting, protective instincts, and he wasn’t getting the training he needed. Malinois are, if you will, the Ferrari of dogs: handlers need special skills and knowledge.

We were in love. In LOVE. This breed seemed perfect for the dog I’d give the job our poor Cowboy had left open, to keep Petey and me safe in Nowheresville when Eric traveled. We researched and learned all the special roles Malinois filled: drug sniffing, Navy Seals, Secret Service, and agility champs, in addition to the herders. I discovered a friend who trained pups for the military, and he raved about the experience.

But could I do right by one? Could I fulfill that high drive and give them a life worthy of their amazing intelligence and drive? It wasn’t like I am in law enforcement. We’ve raised and trained lots of dogs, from puppies to rescues of adult to geriatric dogs.

So then I had my hysterectomy (do you like how I manage to throw that in to every blog post??) and I was stuck in bed. We aren’t moving out to Nowheresville until next month, but I thought I’d start looking for rescues, just to test the waters. I immediately learned it was very hard to find a rescue Malinois. Pit bulls, Staffordshire terriers, German shepherd, mutts galore, but no Malinois. Not real ones. Dogs masquerading as Malinois and weighing in at thirty-five pounds sopping wet. Dogs that looked like yellow labs. Dogs that clearly had no Belgian roots.

I looked at three thousand dogs. Yep, THREE THOUSAND. I wanted them all. I narrowed it down to five, and then I searched for female Malinois one last time.

Bam. Georgia. A two-year old female Malinois that looked like a Malinois. In Tyler, TX, four hours away. Abandoned, starved, and without a foster home. Living in a kennel with ten-foot sides so that she couldn’t jump out, as shorter fences couldn’t hold her or her kind in.

We called and claimed her and then I said, “Oh, God, I don’t know how to train her.” Taking on an animal is a responsibility second only to raising a child. Add to that the issues rescues inevitably bring, some I can’t even bear to imagine. Add to that her breed, her drive, her intelligence, her physical attributes, and I decided to look for help. I Googled for agility and obedience for Malinois, and I discovered a dog named Nitro in Canada, and his owner, a dog trainer with a dog training company named Unleashed Potential, and a pack of dogs so well behaved I wanted to weep. He was so far away though, how could I get to his classes? Turned out there was no need. He had a comprehensive online video series. I bought it, and joined the Facebook group.

And I started watching videos. Video after video. I talked about the videos, to Eric, and to Susanne. I made them watch clips. They laughed at me. Accused me of obsessing, and I knew they were right. I also realized I needed to retrain my fat, spoiled, one-eyed Boston terrier so all of us would be using the same commands and all dogs would respond. I put him in  doggie boot camp: no food from a dish (all by hand, as training motivators), no elevated perches without invitation, and a leash on at all times so he could receive correction if needed.

He went on a hunger strike for a while, but he got over it and started doing better.

We went to pick up Georgia. Oh, Georgia. Beautiful, sweet Georgia. Here’s how Georgia did:

My goodness, don’t you just want to kiss her face? She’s awesome. Petey and Layla think so, too. In fact, Layla and Georgia hang out in the girl’s room which doubles as Eric’s office. Sweet Layla, by the way, has cancer, and it isn’t good. She seems to be feeling all right though and really enjoys Georgia. 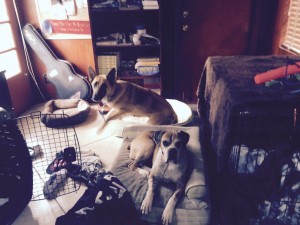 And before you know it, Petey started working like a maniac:

By day four, Georgia learned to play and her inner puppy came out, along with puppy-like behaviors that weren’t so great. Petey occasionally acted like a butt head, and between the two of them, I spent a lot of time rewatching videos, chatting with the Facebook group about strategies, and testing different Prevention and Control methods. Food and toy protection, guarding, loud barking, couch surfing, pawing, and more. Her energy level shot through the roof. The scared dog was gone. In its place was a dog that trusted us and was willing to let it all hang out. She was a handful, but I stayed the course, and she responded. Barking and lunging at the neighbor’s husky and German shepherd, through our window? I put her on her bed in “place” and held her there (without touching her) for thirty seconds until they were gone. Snapping at Layla, who had gone into Georgia’s kennel and stolen toys? A pop, a NO, and five minutes in the kennel. Then out and to place and sit for some praise and reward. Guarding and vocalizing between her and Petey? Nos, pops, and then they both had to sit in place five feet apart for thirty seconds. By then, they’d forgotten they were in a pissing match.

Really, the only negative right now—other than I’m supposed to be finishing Earth to Emily and instead I’m making the dogs into a full time job because Eric is right, I’m obsessed—is that I can’t take Georgia and Petey out for long walks yet. Three weeks since surgery. I’m getting better every day. Soon. Energy burn needed, LOL. For all of us!

I think we can do this. I know Petey and Georgia can.

p.s. Eric is doing all the heavy lifting, I promise.