Fiction University, Life, and Me

Thanks to Janice Hardy, author of The Healing Wars Trilogy and founder of Fiction University. Today she featured a piece I wrote on Deep Point of View, basically how to aliake characters sound authentically like themselves. I used experiences from writing Heaven to Betsy to illustrate the concepts. If you dig that kinda thang, then mosey on over and check it out HERE. I’m pretty excited about this, especially because Writer Unboxed retweeted it. It’s the little things, y’all, it’s the little things.

Have I talked enough about how awesome the voice narrator is for the Emily books? I don’t think so. Tracy Hundley is the bomb. And the first audiobook in the series, Heaven to Betsy, released this week! You can get it HERE. I am so proud of it.

Meanwhile, back at the Nowheresville ranch, progress on the new house is slow and painful, but the builder still thinks he’ll have us in by the end of June. Shh, don’t tell him, but we never believed him when he said the first of June. In fact, my husband had asked off work for the last half week of June/first half week of July for the move, all along. Now we just pray we don’t fall any further off schedule. 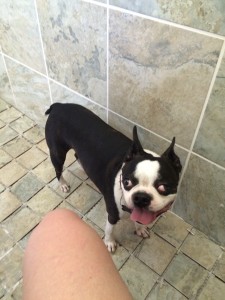 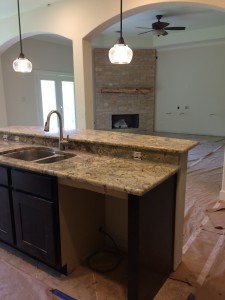 We’ve survived a prom and celebrated two daughters’ graduations since last I blogged: one from Chapman University, and one from high school. 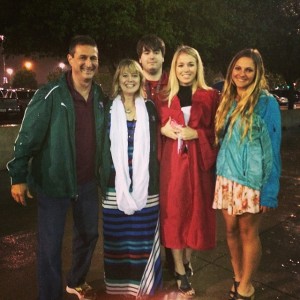 High school, for Susanne. Barely. Blog to come, just so I can vent instead of kill her. ^^ 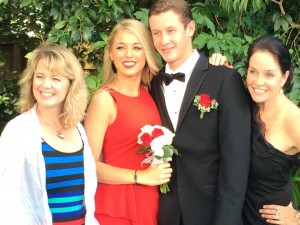 Prom, and prom moms, for Susanne and her date/boyfriend. Same outfit as above. Yeah, whatever, Fashion Police. I’m recovering from a hysterectomy and my gut doesn’t fit into anything else yet. ^^ 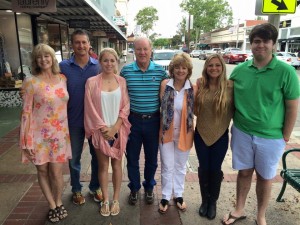 ^^ Post-grad brunch for Liz. And a new outfit for me. 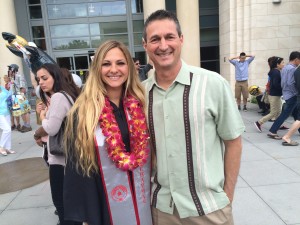 Speaking of survived, did you hear Houston flooded? Nine inches of rain overnight will do that. Our neighborhood was hit bad, but not our block. Our former house took it on the chin. Man are we glad we sold it in January. Refer back to that first graduation pic, above. Yep, it’s raining, and it was flooding all around us at NRG Stadium. But, waddyagonnado, right? Keep Calm and Graduate On. 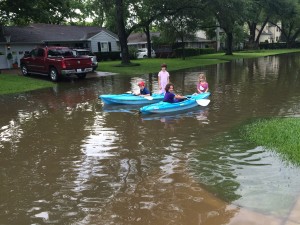 I’ve been doing a lot of dog training while I’m on the mend, with Petey our one-eyed Boston terrier, and with Georgia, our new rescue Belgian Malinois. I’ve learned a lot about terriers, mostly about how they’ll stick their head in a lion’s mouth and laugh at the jaws of death. Luckily Georgia doesn’t truly want to kill Petey, or the pugilistic little toot would be toast. 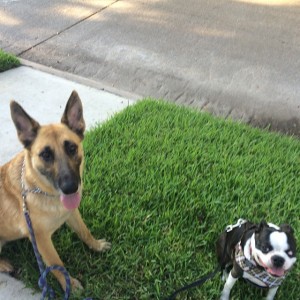 Here’s the terrible twosome holding “sit” with “look” and leashes down on a walk, despite squirrels and dogs with bad manners. ^^ And below, heeling for “Dad,” on his &* birthday. 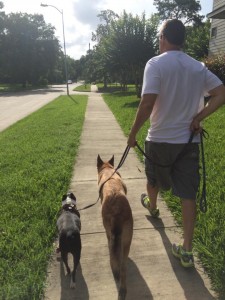 It’s hard to show in these pictures how high strung and high maintenance Georgia is, God love her (and He knows I sure do), which is the other thing I’ve learned first hand, although theoretically I already *knew*. Eric thinks she’s heaven sent to slow me down. How wound-up can I be if I have a dog that requires constant stimulation? (She is currently kenneled for LOUD BARKING in my face because she wanted me to play fetch, again, and I wanted to finish this blog first. Ay ay ay.) I did manage to get Earth to Emily to the copyeditor Rhonda Erb (shoutout to Rhonda! Go Rhonda!), but in light of our upcoming move, four mini-vacations, and starting a daughter in college in July (Whoop! Gig’em, Aggies! A big Fightin’ Texas Aggie Class of 1985 salute to Susanne, who aspires to the Fightin’ Texas Aggie Class of 2019.), we’ve reached a momentous group decision (Eric and Pamela have, that is): I’m not starting Hell to Pay until it feels right/I feel rested, and I’m not going to worry about keeping the “schedule” to finish it. Between brain compression from a writing schedule that was too heavy and Big H recovery and hormonal aftermath, I’m done for, as we say in the South.

No, I am not kidnapped and under duress as I type this. This is me, trying to be normal, and it’s weirding me out a little bit, so let’s just back away from the issue and quietly back toward the door. Today is day two since I was supposed to start writing Hell to Pay, and I haven’t yet. Maybe next week. Or maybe not. Soon, because I’m still me, and because I quit my lawyer job and have to make money ;-). Pardon me while I freak out a little now. 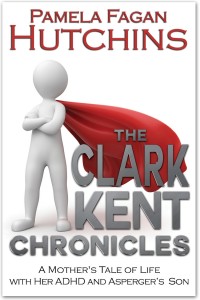 Congratulations to my fellow SkipJack author Ken Oder on hitting #57 on Amazon with his romantic, atmospheric legal thriller The Closing. If you haven’t read it yet, all I can say is “Why the heck not?” 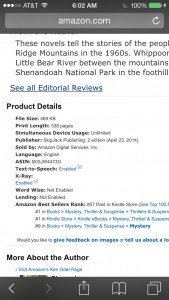 I was so sorry to bug out on Houston’s GINORMOUS Comicpalooza Convention (for a good reason: Liz’s college grad) where I was to teach a Deep POV workshop and participate on three panels. They soldiered on without me. A big thanks to fellow SkipJack authors Rebecca “R.L.” Nolen and Kyle Russell for manning the table and selling my books, too. 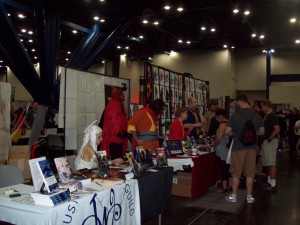 Lastly, recovery from the aforementioned big H has been extended. Apparently, per my doc, the repairs were more extensive than originally anticipated or hinted at post-surgery. He says all is perfect; I’m just not released yet. Yo, Doc, it’s been six weeks and counting. He did say I can run, which I haven’t been able to do for more than three years, and I can bike, which has been excruciatingly painful and I’ve barely done in two years. I’m not impressive at either, yet, but it is soooo nice to have that part of my life back.