This is how he rolls.

Eric and I had a long-awaited Nowheresville weekend recently, one where we planned to get tons done.

Me: Binge read a mystery series (because that IS work for me) by an author I was recently compared to, and try to enjoy it a little instead of just take notes to send to the author. You know, helpful suggestions. Because I know he’d appreciate them.

Both of us: Walk dogs. Go on a date. Drink Route 44 Diet Cherry Limeades each time we pass a Sonic. Harass mama goats into having their babies while we are there. Watch gas tank be installed. Watch driveway formed and poured. Count re-dos in the house. Use new plumbing/shower on the sly.

On the first morning, our neighbor showed up, early. His 10-year old collie had just died. He wanted to know if Eric could dig a grave with his tractor. Well, of course he could and would. After our gas tank installation. But before that even he had to remove the old Quacker hose to our septic tank (the Quacker was removed last week and went to a new home, ah, bittersweet).

He was back from the Quacker in 35 seconds.

“What kind of snakes have black, red, and yellow rings?” he said as he poked his head in the Boookmobile, where I was WORKING, laid out reading.

I sat up. “Red and yellow, kill a fellow. Red and black, venom lack. Did the red and yellow rings touch?”

I handed him the machete. [We did make a positive ID of the snake via pictures; it was a coral snake, very poisonous. Also very shy. He was gone when Eric returned, so he’ll live to scare us another day.] 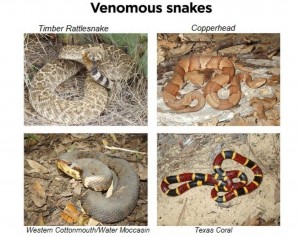 We’ve seen all but a rattlesnake out at Nowheresville. It’s only a matter of time, though, as they are native to the area, too.

Later that morning, we went over to the neighbor’s together, Eric ahead on the tractor. All three dogs came with me. I was going to use the opportunity to socialize Georgia, our rescue Malinois, with their other dogs.

Nothing went well. The water table is so high that the ground actually undulates in places like waves of water. At the first site where they attempted a dig, the tractor got stuck and nearly flipped. They used sheets of heavy plywood under the wheels (Eric elevated the wheels by using the bucket like a jack) to get it out.

Meanwhile, Georgia behaved like a lamb with dogs one and two, but dog three, an elderly small dog who had some health issues, flipped her switch. Not just hers. Petey’s and Layla’s, too. P & L chased the poor snapping thing, and Georgia lunged and barked. I had her on leash, and kept her in a sit/look position most of the time, or tried to. She did better as the visit wore on, but she didn’t do great yet. More socialization visits will follow, a la Dog Training Genesis and Papa Duke.

Eric and our neighbor tried the second spot. It seemed much firmer, and Eric was able to dig a good enough hole, but the ground started rippling again, and it sucked the tractor right in. Stuck. Worse. Another neighbor, who’d showed up to watch and chat, brought back a truckload of cedar logs, which they used IN ADDITION to the plywood to get the tractor unstuck. Again, Eric nearly flipped it.

“It behaves a lot differently with the mower off the back,” he explained.

“My friend’s dad flipped a tractor like this one,” our neighbor said. “He was able to crawl out but they found him leaned against the fence. He didn’t make it.”

His words hit me in the gut. Eric’s recklessness leaves me in perpetual fear that I’ll find his body someday. Not just lose him, but found his mangled body, far, far from help. I scrutinized my husband. “You’re not wearing your seat belt,” I said. Georgia remembered she wanted to eat the neighbor’s little dog. RAWRP RAWRP RAWRP. “And if there’s a roll bar [which there is], then one might surmise the manufacturers consider rolling a risk of this vehicle, which they want you to mitigate with the seatbelt.”

RAWRP RAWRP RAWRP. Eric rolled his eyes, as much as at my lawyer speak as anything. “I promise, I’ll start wearing it.”

I stared up at him, both hands on the dog, but both eyes boring into his.”Swear?” After one more RAWRP, Georgia calmed and sat still and blessedly quiet for a moment.

Fast forward forty-eight hours. Eric is filling erosion craters in our pre-monsoon sculpted yard area. Pricey fill dirt (oh so very pricey fill dirt, 100 loads of it) had washed down the slopes, since our grass had barely taken root before the floods hit. After fifteen minutes I put down e-book three of the series and went to check on him. He’d finished the front yard.

“Good,” I shouted back and shot him a thumb’s up.

It was hotter than Hades, so I returned to the noisily air conditioned comfort of the Bookmobile and e-book three.

“You already done?” I asked, barely looking up from my electronic page. I was near the end, right in the rising action of the plot climax.

I put my iPhone down. “What’s wrong?” I had visions of tractor repairs past dancing in my head.

He sighed and looked down. “I rolled the tractor.”

The blood drained from my face. I felt every drop, I really did. “Oh my God.”

I reached for his arms and turned them every whichaway, looking for injuries.

If you didn’t count the scraped and bleeding spots. “Thank God.” Then I shook my head. “And thank Pamela for insisting you wear your seat belt.”

He smiled, sort of. “Yes. I can’t believe the day I start wearing it, I roll the tractor.”

“Not at first, and then, yeah, a lot. I couldn’t get out of my seat belt or get the tractor to turn off. It finally died when all the oil had run out. I think we may have an expensive problem.”

The air conditioner roared over our heads. Seconds ticked by. Neither of us spoke. Finally, I asked, “How did it happen?”

“The ground caved in as I was dumping a load of dirt in a crater. It went over in slow motion. I had time to think about not getting caught between the ground and the roll bar. I brace my hand inside it.” 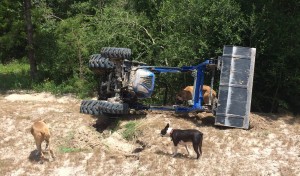 Eric was seriously sweaty, bloody, and dirty, but I went over and sat in his lap and hugged him, hard. Then we walked out together to see it. The dogs had been clipped to their long lines in the shade on the front side of the house, and I let them loose. Georgia raced to the tractor, barking, and sniffed the area around the seat and the buried roll bar. When she’d investigated the scene, she lunged and barked at the tractor like it was a malefic being. 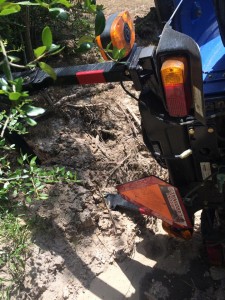 Click to enlarge and see the buried side of the roll bar.

The rest of the day and weekend I just kept looking over at him, shuddering to think what could have happened, so grateful that our neighbor had needed help, that despite Eric’s big plans to get work done, he had given up the two hours to help someone, and that our neighbor had told his friend’s father’s story so that Eric had clicked that seat belt shut and was still there to walk Georgia on a 50-foot leash so she could enjoy some freedom without forgetting herself and ending up three counties away in hot pursuit of small furry things.

To tell me that nothing made him happier than seeing me reading instead of burying my nose in a manuscript (while he did manual labor in the hot sun, no less). To put up our mailbox. To write E<3P in our new driveway. To drink our third cherry limes of the weekend. To sneak into our unfinished house and take long luxurious showers in our half-finished bathroom. To stroke a tiny black baby goat as its mama–named Katie after my fictional Katie–bleated and circled him and Petey. 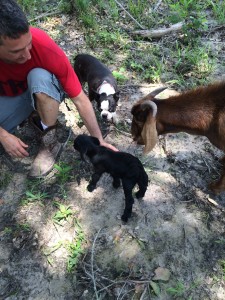 To remind me to wear mosquito repellant. To put a sharp hoe by the door of the Bookmobile in case of poisonous snakes.To soak in the SwimSpa with its lights and fountains under the stars. To pull his wounded tractor upright again with his truck and a chain, and an angry dog giving the tractor another stern barking-to.

Hug your loved ones tight, y’all, and make ’em buckle up.

p.s. Stories I owe you guys: the tale of our youngest almost not graduating from high school, plus the tale of the stolen liver treats.

p.p.p.s. Eric spent about 10 hours working on the SwimSpa. We were able to use it as a giant hot tub and swimming pool (with lights and fountains!!), but his 50 amp breaker was still tripping so he couldn’t activate the swim resistance jets. HOWEVER, the electrician was out again, and we are assured it now works. We shall see.

p.p.p.p.s. Builder SAYS he’ll have us in the house before the end of June. We’re not holding our breath.