She sure has a sleepy boyfriend. 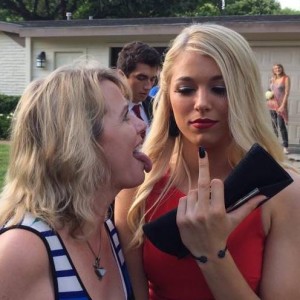 Yeah, this about sums it up.

Halfway through the senior year in high school of our youngest, we were stricken with the first symptoms of severe senioritis at our house: Susanne started missing her curfews.

I texted her twenty minutes after the first time she missed one.

“Oh, I fell asleep watching a movie at Walt’s house. I’ll come home RIGHT NOW,” she typed. Walt is her boyfriend. A nice boy who lives five minutes away, the son of some of my college friends.

If there’s one thing our youngest is a champion of, it’s sleeping. She falls asleep as soon as the sun goes down on the nights she doesn’t go out. So I let it slide. She’d always been on time before.

But then it happened again. I texted her fifteen minutes after the missed curfew.

I sat up in bed, wide awake. “Next time, text me before I have to text you.”

What kind of sleeping sickness had this girl contracted that she couldn’t make it through a movie? And what about him? I let it slide, but I asked her to please try harder and reminded her of curfew.

Then it happened again. I texted her ten minutes later.

“We fell asleep watching a movie. I’m on my way RIGHT NOW,” she typed. My teeth clenched. Susanne was our fifth of five kids. I knew better than to get lax, and that I’d given her one too many chances. Time to get tough, to find my inner “General” as the kids had nicknamed me in their younger years.

When she got home, I said, “You officially have the sleepiest boyfriend in the entire world,” barely camouflaging my sarcasm. “I’ve tried to be understanding, but if you are late again, even one minute, you’re grounded.”

“But nothing. Set your alarm. Don’t go to sleep. Text me when you’re on the way if you know you’ll be late. These are not hard things to do.”

She grumbled a little, but I ignored her.

I sat up in the living room waiting for her the next time. At the stroke of her curfew, I texted. “You’re grounded. I’m going to bed.”

The door opened and shut with a mighty slam.

“No you didn’t. Nor did you text me before your curfew to let me know there was a problem that would make you late, like I’d asked. Nowhere but school and the barn this week.”

“Walt’s Mom was there. You can call her. I left before curfew.”

“I don’t need to. You didn’t make it HERE before curfew, and late is late.”

She stomped to her room. The next time I let her go out, a week later, I was standing at the doorway waiting for her at one minute ’til. I decided the driveway would be an even better place to wait, so I slipped outside. I looked at the sky with its stars emptied of their brightness by the siphoning lights of Houston, up through the massive live oak that crowned our house. The cold concrete woke my bare feet, and I hugged my arms to keep my body warm in the December air. Two headlights sliced through the night and around our corner, a massive dark blue truck behind them. My 17-year old daughter parked and got out. She avoided my eyes.

“You made it,” I said, rubbing my arms, smiling.

Her voice was hostile. “Yeah, but it’s not like I’ve been doing anything wrong, I just fell asleep before.”

I hardened my voice to unyielding. “Yes, you did do something wrong. You disrespected the rules of the house and the people that set them. You still are.”

She cut her eyes to me, over me, through me, but I stood firm behind the daggers of her (self) righteous indignation. “Well, I made it.”

Teenage girls. But you can’t let them get to you. I used a friendlier tone. “Yes, you did. Thank you.”

I refrained from pointing out that she wouldn’t be so tired if she didn’t stay out so late. I was her age once, something she doesn’t really believe. Yet. Her boot steps on the wood floors punctuated her displeasure as she walked away from me. I let her go. I let it go.

She’s made it home on time, in spite of the conveniently sleepy boyfriend, her bad attitude, and their shared senior-year-in-high-school rebellion.

I savored the (brief) moment of victory under the city stars.