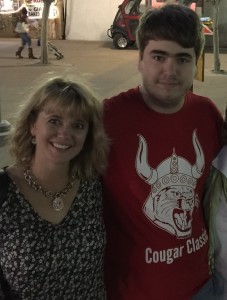 Some of you may have noticed I’ve stayed mum about our Clark Kent ADHD/Asperger’s Chronicles in the last year, since I shared HOME AGAIN, about his return from Texas A&M to Houston. I’ve had emails asking about him. I am proud to report that he is doing great . . . now. I didn’t want to report on him again until I had some real data, and hopefully some real progress. And a lot happened that is worthwhile to share.

1.  Clark didn’t get paid for his summer job. THE WHOLE SUMMER. More on that in my next Clark Kent blog, though. Yes, you’ll just have to wait, and it’s totally worth it.

2. Clark enrolled at U of Houston in the fall of 2014. He is still attending now, a year later. Woot!

3. Clark found his “reason” (motivator) with the U of H debate team, where he is now a varsity CX debater. Yay!

4. We booted on the doctor and meds because the testing was too expensive and we felt coerced. He has seen his old doctor to maintain that relationship in case he wants or needs to return to meds. Clark supposedly now has notified U of H of his ADHD so that if he needs accommodations he can seek them and has sought an appointment with a counselor through the university health center. I have not double-checked on either in months. He is an adult. If he wants it to happen, it will. If he doesn’t, it won’t.

5. Clark’s old high school debate team hired him on a contract basis to assist with their CX debaters. He travels with the team, judges rounds, and coaches the debaters. He went to nationals with them just last week and had a blast.

6. Not all was rosy. He originally signed up for fourteen hours and ended up dropping a class and a lab in the fall. He had a 3.2 (which was great), but only nine hours.

7. Things improved though: in the spring he took twelve hours and finished them with a 3.0.

8. He has talked to me at length about the challenges he realizes he faces. He finally recognizes things we’ve known about him for years. The lying especially bothers him because he understands why he does it yet still sometimes can’t prevent it. That’s a step change, to know himself, even if it’s painful.

9. He is super sweet and helpful, even if he still has basically no hygiene. How Allie still puts up with him after all these years I’ll never know, but true love conquers all, I guess. That, and a razor and a bar of soap.

10. In addition to debate judging and coaching, he is now a tutor for high school kids. Beautifully ironic.

11. And the one to grow on: we’re letting him move into an apartment near campus for this school year! He loves U of H and wants to finish there. He wants to qualify for CX nationals with the Cougars debate team. He wants to be more independent. We want to help him make these things happen for himself.

Phew! So, things have greatly improved with 18 months more maturity since his departure from Texas A&M. Two steps forward, one back has become 2.5 forward and one back 😉