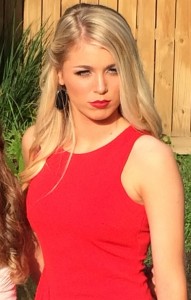 Sometimes we call her Satan. Other times, “Don’t hate me because I’m beautiful.” Mostly we just call her Contrary Mary.

Well, I should have listened to the high school counselor who told me that she didn’t recommend an online class for a high school student. Something about them lacking the responsibility to succeed in a self-paced environment. Especially a senior. But Susanne had missed a month of pre-cal (sick) and didn’t think she could pass her fall semester class because of it. She’d always been uber-responsible about school work, a self-starter. I hadn’t had to monitor her school work, well, EVER. At least not since I taught her to read with flash cards and Bob books, but that was in kindergarten or first grade or some year a really long time ago.

Sure, we’d had issues with her, but never anything that threatened her dream of attending Texas A&M. Skipping class in seventh grade, TWENTY-THREE TIMES. A low drive for excellence (rebellion against Type A over achiever mother?) and associated underutilization of potential. A—ahem—HIGHLY unsuitable if cute and charming boyfriend for two years. Being caught with Skittles and a recipe for vodka and Skittles on the KITCHEN TABLE. Leaving her Facebook open in MY OFFICE with a message about a planned experiment with marijuana. (You think she wanted to get caught on those two???) Accidentally committing us to buying an entire HERD of cattle. But for all her issues, she’d still managed to get accepted to Texas A&M, leave swimming on a high note after regional Texas 5A qualifications as a sophomore, become a Future Farmers of America officer, and raise a reserve champion market steer. Time had flown, and here we were.

She promised to be diligent with the online pre-cal, and we said yes.

Fast forward six months. I got a call from Susanne’s counselor advising me Susanne was in danger of failing English and not finishing her two semesters of pre-cal.

“MuTHURRRRR, I have a high B in English. I don’t know what’s wrong with her. Chill your BLEEP (rhymes with zits and refers to a body part unique to mammals).”

I refused to give her the oppositional response she wanted and looked up her English grade online. Yep, high B. Okay, must have been a false alarm. “What about pre-cal?”

She pulled out her phone and started to type. “I’ll finish.”

I gnawed my lip. It was the beginning of April. She had a month left to go. She said she’d been keeping up, but I hadn’t monitored her; I’d treated her like the young adult she’d acted like, until recently. Now she was nearly out of time (and had used my credit card to pay for a few “need more time” extensions on the course, too), and I was about to undergo surgery. “All right. So turn all your work in and request your two finals BEFORE prom, or NO prom.”

She looked up from whoever she had just selfied in Snap Chat. “Mooooo-ooooom.”

“I’m serious. And until it’s done, that’s all you do, other than school and cows.”

And, snotty tone of voice and a few eye rolls aside, she got to work, and kept working, every day.

Fast forward one month. “I’m going to Dad’s to scan in all my assignments because our scanner sucks.”

I sighed. Pick your battles, right? “For pre-cal?”

She hefted her backpack. “Yes.”

She may have rolled her eyes, but her back was to me so I couldn’t be sure. “Uh, yeah.”

I silently prayed for the strength not to kill her before July 7th, when she would start at Texas A&M. We’d let our four others live past the age of eighteen, so we could resist filicide a final time, couldn’t we?

Her father later confirmed he had witnessed her scanning and uploading her assignments, the assignments for two entire semester’s worth of work. I exhaled. Now, just two pre-cal final exams to go.

Fast forward a week, the Monday after prom. Voice mail from her counselor again: “Susanne is in danger of not receiving a recommended diploma, which may impact her eligibility for college, depending on where she is going, if she doesn’t finish both her pre-cal classes.” Before I could call her back, I got an email saying essentially the same thing. But it further clarified that the online school had no record of Susanne turning in ANY of her work. And an added bit that Susanne had lied to her about doing it in the first place. Well, I knew she hadn’t lied—I’d seen her do it, seen the work, and her dad had seen her scan and upload it. But what had happened to it in transit?

Panic set in, for the parents at least. For Susanne? Not so much.

“Whatever, Mom. I’ve known since Friday that they didn’t get them.” Before prom.

“When were you going to tell me?”

“Chill your BLEEP. I’m going to rescan and resend them.”

This time I monitored. She did it all. I emailed the counselor that the work had been resubmitted and we should receive good news soon.

But the school again said that they didn’t receive it. And now it was too late for Susanne to resubmit, receive the tests, take them, return them, and have the professor turn in grades for them, before her graduation deadline.

We attacked the problem on two tracks: I tried to intervene and do the resubmittal myself, because there could be a miracle, and we needed to work toward it, but an angry Susanne snarled at me to stay out of it. I watched over her shoulder. Again. And then we learned the problem: the school had never anticipated that a student would hold their assignments for two entire semesters then submit them one after another continuously. In fact, they assumed that anyone who did submit more than one assignment in a fifteen minute period was cheating, and they rejected the submittals. It took two full days to resubmit her work, waiting half an hour between each. Eric had to get on the phone with the online school over, and over, and over. He ferried Fedex envelopes back and forth. Meanwhile, Susanne seemed nonplussed.

On the second track, we got on the phone with the high school counselor and Texas A&M. Or, rather, her father did. I had a hysterectomy less than two weeks before, and I was—to put it mildly—hormonally impaired. I had absolutely no emotional bandwidth. Zero. Zip. Nada. No one could deal with me. The one conversation I accidentally had with the counselor went very poorly, ugh, poor counselor. None of this was her fault. She had tried to prod Susanne, she just hadn’t been any more successful than we had. Any minor bobbles on the counselor’s fault were certainly not causal: this was squarely on Susanne.

Yet Susanne had done the work in a (barely) timely fashion. She had attempted to comply, with enough time left to finish the exams. It seemed like we should be fighting for her, so we did, to a limited extent.

Finally, finally, the online school sent the finals. Amidst great stress while all this parental and counselor communication was going on—and while a line thirty-five sobbing and teeth-gnashing kids deep waited outside the office, shuffling in and out every few drama-filled minutes—Susanne sat for the finals.

AND SHE FAILED THEM BOTH.

After all of that, she failed them. After all that was done for her—to get exceptions so she could take online classes after her illness, after more than adequate time and countless reminders, after we all dropped everything (mom, father, and step-dad, and even her counselor to a certain extent)—she failed them.

And finally, finally it hit her: she might not get to go to Texas A&M after all. My stony, emotionally impenetrable girl broke down in sobs that lasted for hours until she finally fell asleep, exhausted, two nights before her planned graduation, all the while protesting that she wasn’t crying about that. She didn’t know what was wrong, but it wasn’t about pre-cal or her graduation or whether or not she’d be an Aggie, so I should just leave her alone. I was actually relieved. She needed this to get through to her, she needed to never let this happen again, to learn while she still had the safety net of home and parents.

The next day, we got answers from the school district and Texas A&M: Susanne was still eligible to graduate high school, just not with the “college recommended” diploma. A&M, it turned out, didn’t require one. For already-accepted students, they required two maths, which she already had, and a diploma of any kind from an accredited high school, which she would get after all.

She’d still get to start the college of her choice, on time. The girl was lucky. Very, very lucky. More lucky than she deserved? Maybe. She’s had her share of unlucky (an anaphylactic condition that baffles the experts and missing six weeks of her senior year to a vasculitis usually seen in four-year old boys), but, I mean, still, she’d totally booted this. And we hadn’t even killed her (yay, us!).

But that didn’t mean she had wriggled off the pre-cal hook. Guess who will be required to retake pre-cal exams all summer long up in the high school counselor’s office until she passes them?

OH MY GAWD THE POOR COUNSELOR!!

So we sent the woman a Harry & David Chocolate Tower and are hoping she doesn’t accidentally kill Susanne herself.