The Summer of Hell 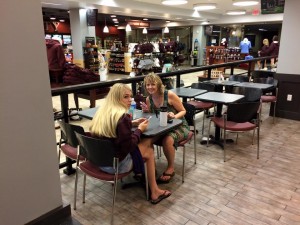 To read earlier installments of seniorities, click Here and Here.

Two months ago we took our youngest to Texas A&M for the New Student Conference, prior to her moving to TAMU for Gateway summer school. As I sit here typing this, she is about to start her first fall semester as an Aggie, and I am proud of her and miss her. Back back then, though–back when we went to the NSC–things were quite different.

For starters, Susanne was a beast. She made us late to everything, she didn’t speak to us except to complain or contradict us, and she spent all her time on her phone. It got so bad that I (calmly, sweetly) explained to her that if she couldn’t be nice, we could just leave her in College Station by herself and she could get a ride back to Houston with a friend. This was AFTER I had told her the week before that the title to her car was in my name, and if she couldn’t be nice for just three more weeks until she moved out, that I was keeping the car for myself. I like 2010 Mustangs. I think I’d look pretty good in one, frankly.

“Yeah, well I heard GiGi made you go to NSC by yourself because she was too mad at you to go with you, when you were my age,” she said. Her eyes twinkled behind their snotty expression. She was enjoying making us unhappy just a little too much.

“Correct. Which is how come I know for sure I don’t have to be here if you’re being a beeyatch.” Eric nodded at me, cheering me on, but keeping a straight face.

She was nice long enough to get us to take her to Fuego’s for dinner.

The next day I channeled my happy place and ignored Susanne for all I was worth. The picture, above, was snapped of us on day two. I don’t look like I’m about to kill her, do I? Because I was really trying to hide it like a good Southern mama. Shortly after this photo, it was time for her to put together a draft of her fall schedule, and to take her math placement exam. I offered to help, but I wasn’t deemed nearly smart enough for the task. Thank God. I left her to it and took a walk around the MSC, breathing in through the nose and out through the mouth.

“So, parents, anyone in here experiencing the summer of hell with their student?” the speaker asked. One thousand hands shot in the air, and as we raised ours, Eric and I laughed. “This is a hard time for a parent, because it’s a hard time for a student. Are they kids or grown ups? Do they want to stay or go? Will anyone remember them after they leave? Will they be able to come back if they need to? Will life continue on without them at all?” She paused. “Parents of Gateway students, you’ve got it worst of all because instead of spreading it over three months, your students are compressing it into six weeks, all of it. So hang in there, relief is coming soon.”

Knowing other parents were suffering like us at the hands of their teenagers helped. A little. Knowing all this would end in two weeks when she started Gateway summer school helped more. After our session, we rejoined Susanne, who was beaming.

“How’d it go?” I asked her, wary despite all the teeth she was flashing.

“Julia and I basically put together the same schedule.” She tossed her hair and fell in step with me.

“I met her in the Gateway session before we registered.”

“She lives twenty minutes away from our new house in Nowheresville.”

Our. Before it had been “yours,” as in Eric’s and mine. As in the house we were moving into while getting rid of the one that had her room and her stuff in it. Whoops. “Cool.”

“Yeah.” She continued to chatter on, all sweetness and light.

Eric squeezed my hand. We smiled behind Susanne’s head, enjoying our reprieve, however short lived it might turn out to be.