At Least Petey Won't Get a UTI

Our rescue Belgian Malinois, Georgia, is a peach. She’s smart as a whip (kicked Dog Training Genesis’ butt!), sweet, funny, and queen of all she surveys. She’s also a bed wetter prone to urinary tract infections (UTIs).
Argh!
A 70-pound bed wetter who sleeps in her own soggy mess. A long-haired bed wetter who jumps up from her puddle only to track and drip it all over the house, not just the tiled interior, but into our (brand new) carpeted bedroom. A wetter whose tinkle smells like seventy-hundred dead skunks and gets worse the longer it sits. At first we thought she was doing it out of anger or resentment, but quickly it became clear she only urinated when in deepest sleep, and that she seemed more upset about it than we did.
As we tried to determine what was causing it, we spent two long weeks washing dog beds, dog bed covers, and blankets daily, in soap, vinegar, and bleach. We mopped and mopped and mopped. We scrubbed our bedroom carpet with Resolve on our hands and knees, before we learned we’d have to shut her out of our room. We cursed when we stepped in the tinkle tracks (and lakes) outside our closed bedroom door. We burned smell-good candles and sprayed room deodorizer that made it seem we lived in an orange grove recently visited by a skunk, and we washed Georgia several times a day. Finally, we realized it wasn’t a temporary issue and that we needed help.
Although we’d never faced this before with our many other dogs, we learned that spayed dogs often struggle with these issues. We had a choice: medicate or try natural remedies. We decided to try natural remedies first. Greek yogurt, cranberry gel pills, apple cider vinegar, less dry food, and some herbal incontinence remedies for dogs in (very expensive) pill form. Although she didn’t love the taste of the apple cider vinegar, her condition improved immediately. We could tell she felt better, and her tinkle wasn’t quite as stank. And she mostly didn’t pee when she slept anymore.
Mostly.
“Maybe she’s going to have to sleep outside,” I suggested.
Eric shook his head. “What good is a personal protection dog if she’s not near the person?”
I remembered how she’d barked to go out in the middle of the night a few days before. Thinking she needed to tinkle (happy that she might do it outside instead of on her fancy bed), we let her out. She was gone in a flash and didn’t come back until five a.m. Eric was right; that wasn’t much protection. She’d have to stay inside to do me any good.
“If someone does break in and come for our bedroom, at least they’ll slip and fall in the lake outside our bedroom door,” I decided.
“There’s that,” Eric agreed.
So we embarked on our first RV trip with her in our 24-foot class C motorhome, aka the Bookmobile. Petey, our one-eyed Boston terrier, came, too, while the other two dogs stayed at home with the livestock and our youngest daughter.
“What are we going to do about the tinkle issue in the RV?” I asked Eric, as I packed and sorted for our  trip.
He lifted a box of kitchen supplies, “We need to be sure to bring heavy duty trash bags to put around the dog cushions.” Eric is so practical. His suggestion made perfect sense. We’d started doing it at home anyway in the previous week. Georgia wasn’t wild about it, and she’d slept on an arm chair in protest, which resulted in us washing arm chair cushions the next day. Now we have all the cushions turned vertically so she won’t do that again. Eventually she gave up and slept on the plastic-covered bed, albeit on her purple satin and velour princess blanket.
Despite Eric’s trash bag solution, I worried, and I searched the internet for ideas. I found tons of diapers for dogs, but they all had bad reviews. I read through the comments and saw that some people cut holes in pull-ups for their dogs’ tails. I bought the biggest size available at HEB, size 4T-5T. I got the cute pink girl kind, of course. 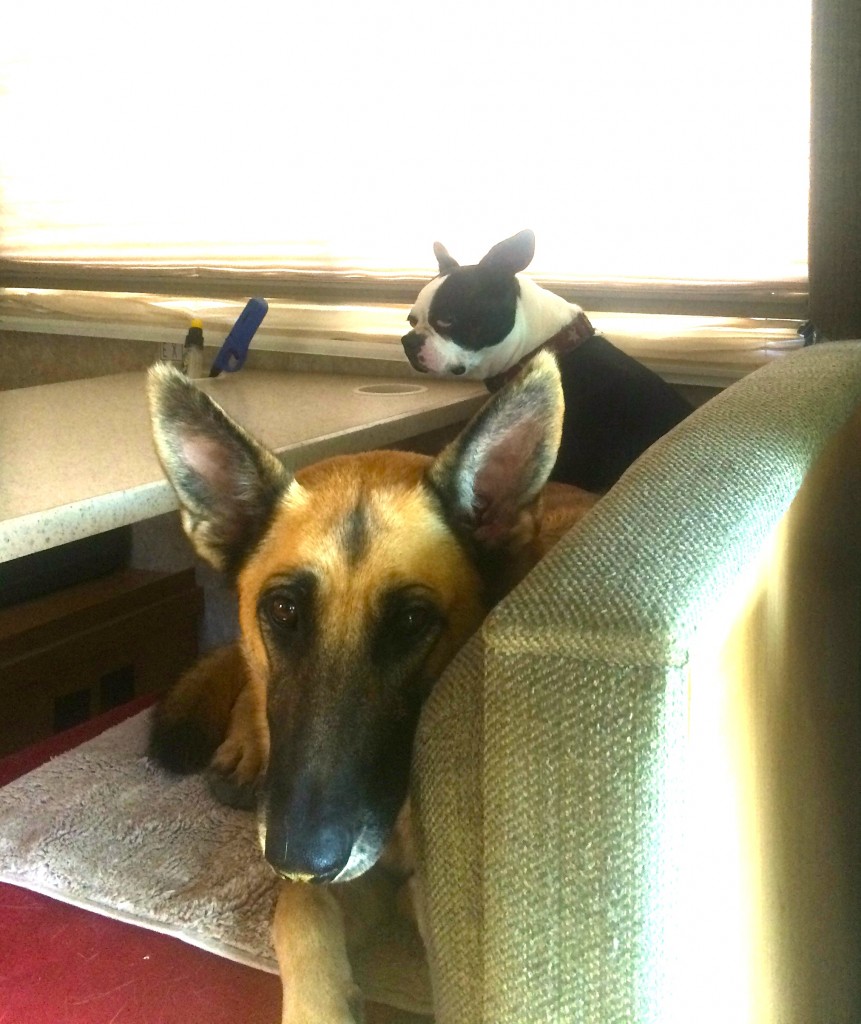 On the first night of our trip, Eric slid the pull-ups carefully over Georgia’s tail, then stepped her feet through the leg holes. She held still, but she didn’t look happy, and she wouldn’t meet Petey’s eye (he only has one, after  all). Petey looked pleased. He’d put up with Georgia’s exuberance, dominance, and herding for months now, and his new favorite pastime was whatever upset her apple cart. Stealing her pig ears. Darting in front of her to claim the bed she wanted. Dashing across her path to make her have to stop and turn. So, yeah, he didn’t seem to mind her discomfiture one bit. 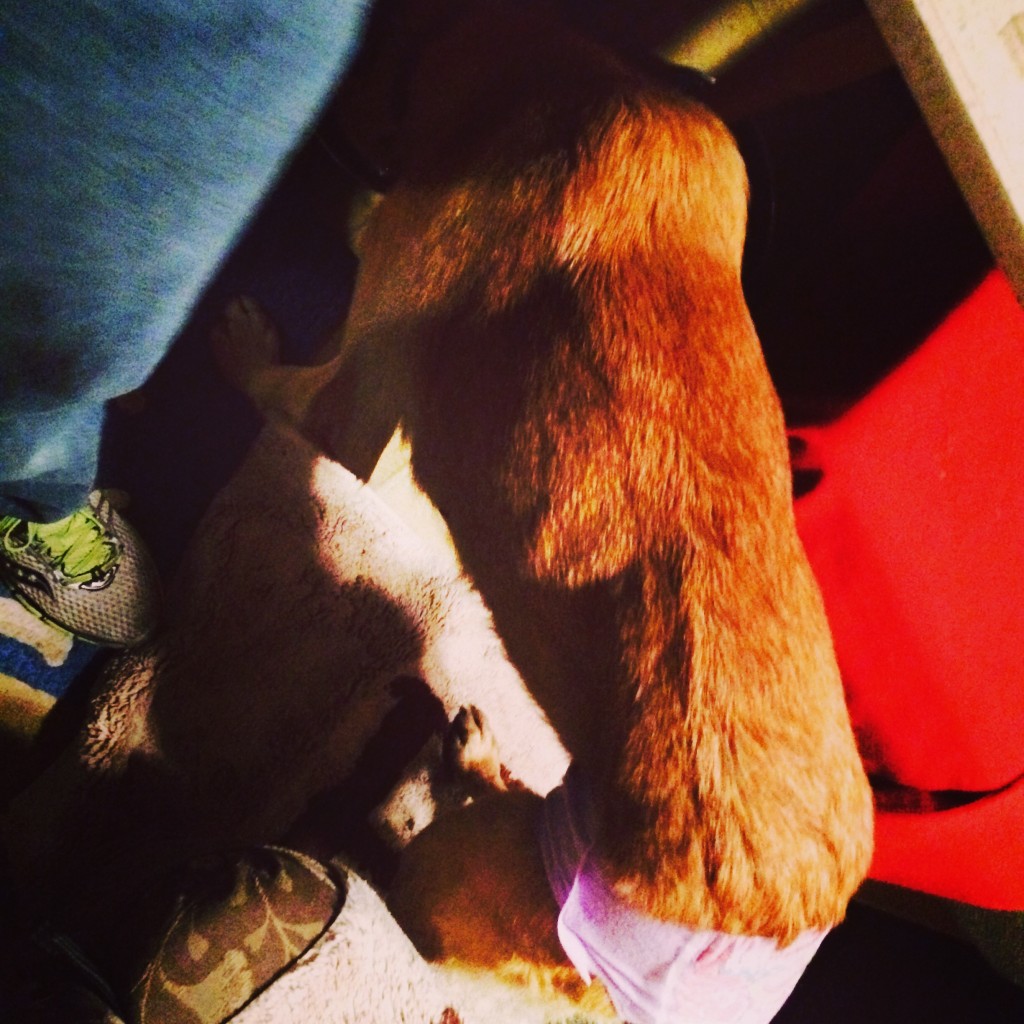 We went to bed optimistic. When we woke the next morning Georgia’s pull-up was dry. Phew! Days two, three, and four were dry as well, although on morning four we found the pull-up in the floor beside her bed. Somebody had figured out how to shed it.
Each day it grew harder to get the pull-up on. On day five, we got to bed late. The dogs were already asleep. Eric didn’t have the heart to roust Georgia and put the pull-up on. Meanwhile, Georgia had been on something of a hunger strike while we were on the road. She was much more interested in new smells and sights and sounds than food. We used to feed her the incontinence prevention pills with her wet food (and apple cider vinegar, cranberry, and yogurt). Usually, I did the food and remedies. Somewhere along the way, the cranberry gellies had spilled into a little bit of remaining dog food. I had several canisters of food, so I just left the cranberry in the nearly-empty one and started feeding from the new one. I used the old container to hold all my other ingredients, like the pills we were having trouble getting her to eat. Some days we ended up picking the pills back out of the glumpy, yucky mixture and hand feeding them to her sandwiched in cheese or stuffed into sausage.
But not always. Sometimes we forgot or got lazy.
Still, when we got up the next morning, the RV was dry. Yay, Georgia!
Later that day, she fell asleep in the rental car after a hike and soaked the dog bed, which we’d forgotten to put the trash bag around. Not yay.
She got a pull-up again on night six, but just barely, since by now she was all but slithering away from Eric when it came time to don the garment of shame. On day seven, we were back on the road and arrived at a new RV park late at night.
We forgot the pull-up. We forgot the evening urinary incontinence pills. We forgot the black trash bags. And when Eric woke up at five a.m. to answer his own call of nature, he smelt it before he felt it, because there are no secrets in a 24-foot enclosed space, especially not when one of the secrets is skunk pee.
Georgia had leaked. She had leaked and leaked and leaked and leaked and leaked. One thing I should have mentioned earlier is that Georgia loves to drink. She drinks more than any dog we’ve ever had. So when Georgia loses control, there’s a lot to lose.
Not only had she leaked, she had done it while sleeping on an RV seat. An upholstered RV seat. Petey peered down on the scene of Georgia’s crime from his dry perch with haughty superiority.
Well, we were due to meet friends for an early breakfast before getting on the road. Operation emergency dog and RV clean-up commenced in the Colorado pre-dawn. While it was frustrating, mostly it was infuriating. We could have prevented this with trash bags in the right places and if we’d remembered the nighttime ritual of pills and pull-ups.
“Make sure she gets her pills and a lot of yogurt and apple cider vinegar in her food this morning,” I begged Eric as I ran to the shower rooms. “We have ground to make up in her system.”
“No problem.” He turned the business end of a hose on our sheepish Malinois and started washing her.
When I came back, Georgia and the RV were clean.
“I fed the dogs.” Eric grabbed our shower kit and took off for the shower rooms himself.
“I’ll finish getting us ready to leave, then.”
I scurried around the RV, closing and locking windows and vents, securing potential projectiles, bungee cording the bathroom door into an open and locked position, staging items in the console up front—like  Eric’s glasses, which I found under a pile of clothes. Then I picked up the dog bowls. Petey’s bowl still had what looked like food in it. That never happened. Petey eats until near-explosion, and we constantly battle his food thieving and his weight.
I put on my glasses and looked closer at Petey’s bowl. The bottom of the bowl was lined with cranberry gellies. I grabbed Georgia’s uneaten food. There was still kibble in her bowl, but mostly there were cranberry gellies in it, too.
Eric had fed them the remnants of food mixed with the bottle of cranberry from the old food container.
But you know what? Georgia didn’t wet the bed on the last night of our trip. If Petey could talk I’m sure he would tell you that his urinary tract has never felt better, either.
And Georgia and I are heading in to get her prescription on Monday, first thing.
That’s all I’ve got.
Pamelot