by Pamela | Feb 15, 2016 | Emily, My Half-Assed Efforts to Become a Serious Writer, Puppalicious And Beyond | 34 comments

Calling for Advance Readers . . . needed for Hell to Pay! Oh, and that calls for a “blog readers special” announcement, too. Hell to Pay is now to be known as #7 in my What Doesn’t Kill You romantic mystery series. That’s right, #7. Why? Why is it no longer Emily #3? Is it just to torture and confuse you? No, it’s only partly that. 🙂 It’s because all of my novels really are part of one series, and breaking it down by protagonist was confusing some people. My female protagonists are a butt-kicking group of friends, and they trade off lead in the novels in the What Doesn’t Kill You series. Right now I am writing a Michele book, but then I’m switching to Ava (and going back to St. Marcos!), and I’ll be adding Laura books and Maggie books, too. Yeah, you guys don’t know Maggie yet. She’s in the Michele book I’m writing now. If you look at the top of the website, there’s a banner with all my novels. We just redid them all for the What Doesn’t Kill You series. Coolness. I am so excited!

Anyhoo, if you want to be in the Acknowledgements for Hell to Pay and exclusively read it first, comment below. I’m taking the first 25 people (I already have 17 who signed up through my Facebook group, Knights of Pamelot). However, you have two jobs if you sign up for this gig. 1) e-mail me any boo boos you find 2) post a review the week of March 20th, when I e-mail you to let you know it’s time. Your review will be considered for the book’s blurb, too. Fun stuff! Secret: this is one of my favorite novels I’ve written.

Baby Goat Love . . . one of our does had twins on February 7th. We christened them Peyton Manning and Cam Newton. Peyton’s physical dominance led us to predict a Broncos Super Bowl win. I wish we’d have put money on it. However, the doe Lucy and Cam Newton weren’t doing well, and they both died 24 hours later, on my birthday. It was traumatic, and we did everything we could to save them. Peyton Manning was left an orphan. Our cow Dixie went bonkers when Eric buried Lucy and Cam Newton, sticking her head in the grave, pawing the dirt, and bucking and spinning. Lucy was her favorite friend. So sad. We kept Peyton Manning in the house and bottle fed him. Then another doe, Katie, had twins. We named them Kathryn and Annabelle after our nieces. We tried to get Katie to adopt little Peyton Manning but she wouldn’t. He stays out in a small pen with them a lot of the time now, but we’re still bottle feeding, and loving him to pieces. Here’s some goat love pics: 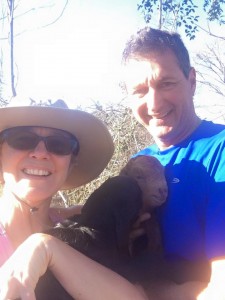 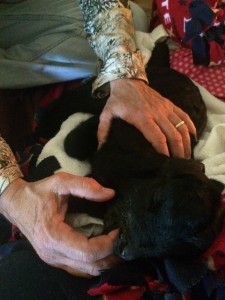 Mama Lucy got too sick to take care of her babies, and the adorable curly-haired black one was left alone in 25-degree weather and no food overnight. He developed hypothermia. His little body just wouldn’t warm up. It was so sad. We rubbed him with towels, covered him in blankets, and put him in front of the fire, to no avail. 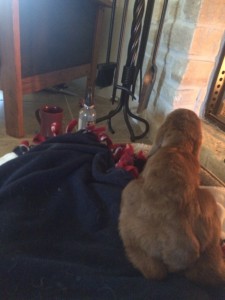 Here’s Peyton snuggling his very sick brother (under the blankets). 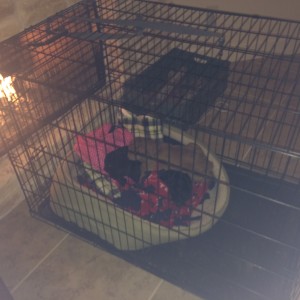 Peyton huddled close to him in front of the fire until the final moments. 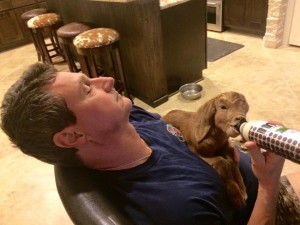 The next morning, we had a baby goat to feed. (See the beautiful backing to our island that Eric built for me as a birthday present–little did he know I’d end up getting a house goat, too.) 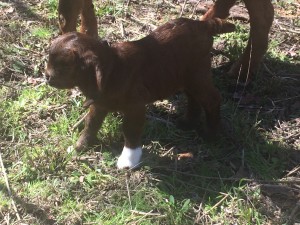 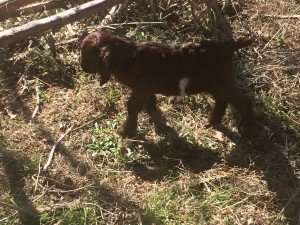 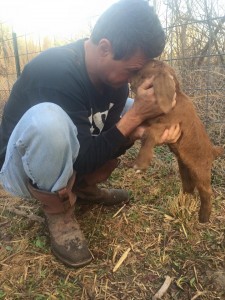 But their mother wouldn’t take Peyton no matter how hard we tried, and he was so lonely. 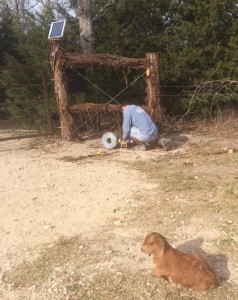 Until we gave in and started letting him hang out during the day with us and the dogs. Here he is at our gate as Eric strung barb wire. 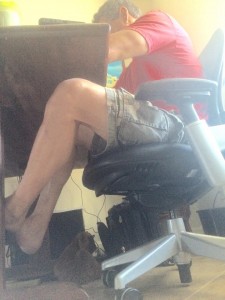 And under Eric’s desk as he worked.

We love us some Peyton Manning the house goat!

Finally, Karaoke Crayyyyziness . . . We celebrated Valentine’s with small town karaoke night at the local tavern. Small towns (and the friends you make in them) rock. And so did my pink hair. I sang (a lot), everything from You Oughtta Know from Alanis Morrisette to Travelin’ Soldier from the Dixie Chicks. 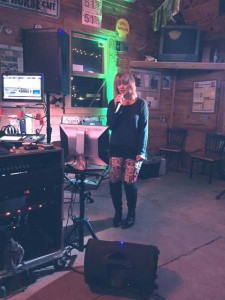 Girl Crush. Such a fun song to sing. 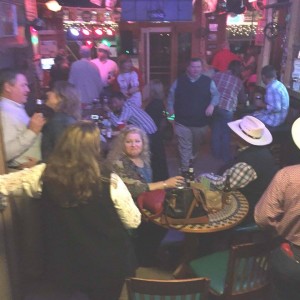 Can you see Eric and me in this picture? 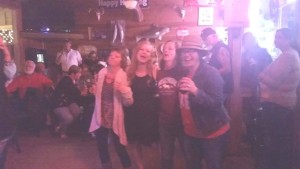 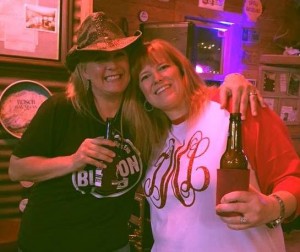 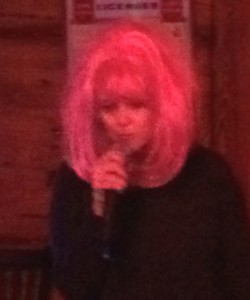 And my pink hair 🙂 courtesy of Denise aka Kountry Chick Karaoke.

Upcoming this Friday: video blog of Peyton Manning, me, and the answers to Katie’s book club questions. Don’t forget to leave a comment if you want to be on the advance read team for Hell to Pay!