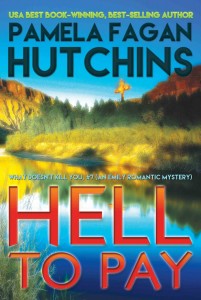 This week we’re continuing our interview with Jack, Emily’s love interest in the upcoming Hell to Pay (What Doesn’t Kill You, #7). Normally these interviews are one-on-one, but Jack proved to be as hard to get an answer from as I’d been warned, so this week Emily is coming to encourage him a little.
Before we get started, if you haven’t read their first adventure yet—Heaven to Betsy (What Doesn’t Kill You, #5): An Emily Romantic Mystery—you’d better hurry, because their final novel is coming March 26th!! Here’s a chance to win Heaven to Betsy before then. I’m giving away 50, so your odds are good! https://giveaway.amazon.com/p/12ccafee4c1bf4f5

Pamela: Hello, you two. Great seeing you.
Emily: It’s nice being back. And I’m so sorry that last week Jack wasn’t more—
Jack: Comfortable.
Emily: I was going to say cooperative.
(Jack reaches for Emily’s hand and kisses the knuckles, then holds it on his leg.)
Pamela: So how would you describe Jack, Emily? The strong, silent type?
Emily: In the beginning I would have called him eccentric, mute, and obtuse.
Jack: (left eyebrow lifts) Hey now.
Emily: I said in the beginning. Now he talks around me more. He still doesn’t answer a question straight on, but he can be pretty funny.
Jack: (nods) I’m very funny.
Emily: (shakes her head) I wouldn’t go that far, babe.
Pamela: Which is of you is the cover hog?
Simultaneously, Jack and Emily: Her/him.
Pamela: The neat freak?
They both point to Jack.
Pamela: The spark plug?
They point to Emily.
Pamela: What do your parents think of Jack?
Emily: He has my mother completely bamboozled. Dad’s the bigger surprise, though. He respects Jack and he’s grateful to him.
Pamela: No lingering resentment over Jack prosecuting him and sending him to prison?
Emily: Dad knows he got a fair shake.
Jack: John did the wrong thing for the right reasons. He’s solid.
They smile at each other, the eye contact prolonged, and the air crackling with electricity.
Pamela: I must say, you two do seem to, um, like each other.
Jack: Yep.
Emily: (laughs)
Pamela: Okay, last few questions and then I’ll let Jack pick a book club question for this month. Emily, what’s the craziest thing you’ve ever seen Jack do?
Emily: Jack is Mr. Conservative. I think the wildest I’ve seen him get is driving five miles over the speed limit.
Jack: (mumbles) I thought it was a 45-mile per hour zone.
Pamela: And the craziest thing you’ve ever seen Emily do?
Jack: Maybe it was crawling after an armed man into a pitch black mine shaft.
Emily: It was to rescue two teenage runaways who’d witnessed a murder and are very dear to me!
Jack: (shakes his head) Yeah, but still crazy. But that craziest thing she’s done is take a chance on me.
Emily: (turns to him): Ahhh, that’s so sweet. (leans in and kisses him)
Pamela: Whoa, whoa, whoa, you guys, before you start that I need a book club question from Jack.
Jack: (straightens up) From Earth to Emily: Can you forgive Jack for keeping secrets? (he nods, a serious look on his face but his amber eyes twinkling)
Emily: (snorts)
Pamela: Has Jack struck a nerve with that question, Emily?
Emily: Ask me again after people read Hell to Pay.
Pamela: Will do. Thanks you two. Now go get a room.
(laughter)