Great Reading is #PoweredbyIndie: The Story Behind MY Story

by Pamela | Oct 7, 2016 | Katie, Katie & Annalise, My Half-Assed Efforts to Become a Serious Writer, Romantic Mystery Series, The Story Behind the Story, What Doesn't Kill You | 2 comments 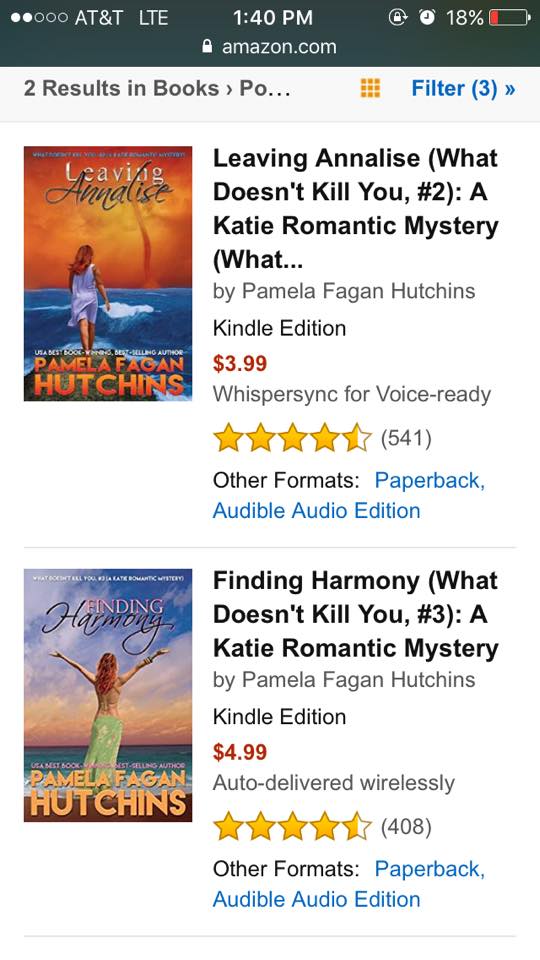 First, the winners of the Katie & Annalise audiobook codes will be getting an email from me directly. Thanks for your interest and leaving an honest review. I appreciate y’all and hope you enjoy it!

I so excited, y’all! I got an email on October 1st from Amazon Kindle Direct Publishing announcing that my novels were included in their Celebration of Great Writing #PoweredbyIndie.

(The following is an adapted excerpt reprinted with permission from SkipJack Publishing from my nonfiction hilarious how-to, What Kind of Loser Indie Publishes, and How Can I Be One, Too?)

A few years ago, I stood at a crossroads in my writing journey. I had three novels out with three great agents. I had their cell phone numbers on my iPhone. I didn’t have offers of representation, but I did have phone dialogues going and requests to see rewrites. I wasn’t there, but I was this close.

At the same time, the publishing industry was at a crossroads of its own. E-books seemed poised to take over the world. Profit margins were tight. Major authors like Stephen King (gasp, the moneymakers) were discovering self-publishing. And it wasn’t just them. There were the indie authors. Amazon was offering 70% Kindle royalties. E-commerce was truly accessible, and print on demand (POD) had become almost easy. Gone were the days when a writer’s only alternative to traditional publishing was an expensive vanity press. Amanda Hocking had burst onto the scene, making millions off books spurned by agents and editors. J.A. Konrath had shown that a middle-of-the-pack author could turn his backlist (backlist = all an author’s books but the newest one) released from contract by his publisher and future indie-published writing into a more than respectable income.

A steady stream of authors began making their way over to Amazon. Their dribs and drabs of sales plus the sales of self-publishing rock stars summed up to something significant that the publishers felt in their wallets and in the deepest, darkest, most scared places in their hearts. The indie sales didn’t, however, make much money for the self-published authors themselves, who tend to have trouble selling a copy outside of their immediate families. And 70% of nothing is, well, nothing. Or rather, it’s nothing in terms of money, but if your goal is to share your words and your worlds, it’s a whole heck of a lot of something—and to the major houses, all of that something started taking a bigger and bigger toll.

The publishers needed to figure out how all this change would impact their business model, but frankly, at the time that I was deciding whether to indie publish, they hadn’t yet. Writers discovered the concept of disintermediation, where the only truly necessary players in the game of book sales were author and reader, save possibly a freelance editor, a digital artist, a publicist, and a business consultant, all of whom an author could retain for herself if she chose to.

Slim publishing-company profits narrowed further while I went back and forth over many months in dialogue with agents, and I had a decision to make: Should I keep chasing after a possibility that kept getting less likely and would cost me control of my work? I mean, who really knew what return I would get on my three novel rewrites? I certainly wasn’t guaranteed representation, and even if I got it, a book sale was not an automatic. Until I signed a sales contract, the size of my potential advance would be shrinking daily, and the other terms of my deal would be growing less favorable as well, because this was business, and a business on the rocks. That potential deal would still require me to promote and market my own book on my own dime and my own time. Bottom line: I had no guarantee of a return, or even of ever traditionally publishing.

I started seriously considering throwing my hat into the ring of indie publishing. I’d still have no guarantee of a return, and I could lose my own money, at that. But the rewards were huge. I’d get the chance to share my works with whoever wanted to read it. I’d retain control—beautiful, blessed control—and publish the book of my heart, not the book of someone else’s balance sheet. And that was the crux of it to me: control. I’d been an entrepreneur for nearly twenty years. I knew how to run a successful business. And promotion was a wash; I’d be doing it whether I went indie or stuck to traditional. How big a stretch was it, really, to move from entrepreneur to authorpreneur? Bottom line: I had no guarantee of a return on my investment as an indie, but I did have a guarantee of publishing, and I could do it my way, which is what really drove me.

I’d love to say the result was an immediate gusher, but I’d be lying. It was a smashing success to us, but modest by major house standards. I sold 5,000 copies of my debut novel in the first six months, and almost half of those sales were of paperbacks. Combined with Kindle giveaways during that time period, 50,000 people got a copy of Saving Grace. It was picked up nationwide by Hastings Entertainment for their 137 stores, and regionally by Barnes and Noble. It led to greater exposure and sales of my backlist of relationship humor books. It paved the way for my future books. It beat the performance of most debut novelists with major houses. For all of that, I am grateful and excited, but not rolling in money, although eight books later, I’m a full-time author and retired attorney who calls all the shots in my business and enjoys the excitement of developing and implementing strategy as well as writing books that connect with readers.

I’ve learned that the upside potential of publishing as an indie is huge. The downside is you publish your book, which isn’t a downside. The buck stops with me. My story. My editor. My cover. My efforts. My mistakes. And my rewards. Best of all, as an indie, there’s no one standing between my readers and me, managing the relationship. It’s just us, diving into the imaginary worlds together. And I can price my books so that my readers can afford to indulge their habit. We both win.

So, for some of us writers, despite the odds and the cons, our goals reflect our desire for independence. The intrepid souls, stubborn to the bone and yearning to work like a pack mule, the kind of losers who’re right for indie publishing.

(Thank you Amazon KDP for making this dream come true possible for me and so many authors, and for including me in Celebrating Great Writing #PoweredbyIndie!)

p.s. Join in my Thunderclap for Fighting for Anna?