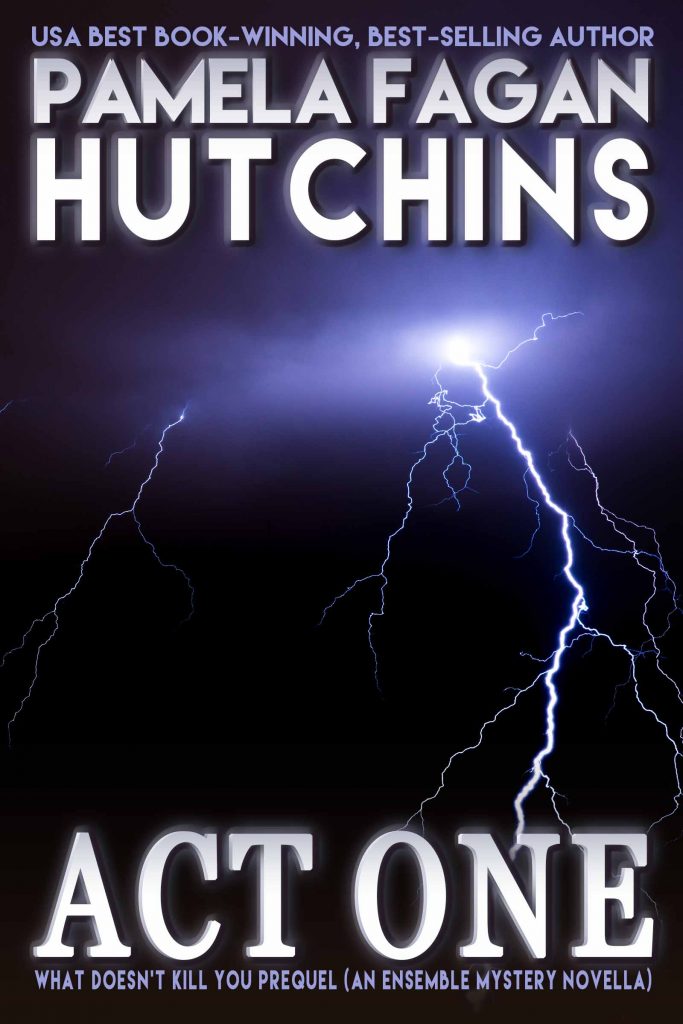 Everyone that subscribes to my e-newsletter is a winner today and gets an EXCLUSIVE What Doesn’t Kill You e-book, the first chapter of which you can read below (teaser! teaser!). But before you begin, we have two special winners of the Fighting for Anna butterfly pendants/charms out of 750 entrants: Jo and Pat. Congratulations!

Act One (What Doesn’t Kill You, Prequel): An Ensemble Mystery Novella

A literary, dramatic, or cinematic work whose narrative takes place before that of a preexisting work in the same series.

A unit or group of complementary parts that contribute to a single effect.

A short story with a compact and pointed plot.

Five years before Saving Grace (What Doesn’t Kill You, #1): A Katie Romantic Mystery

Maggie teases her brunette hair with its chunky blonde streaks into a bigger rat’s nest. She leans in a nose length from the mirror, eyes unfocused and crossing, then hefts an industrial-sized can of Aqua Net and blasts her roots. Instant stink. Her ballast shifts, and she loses her balance, stealing a quick glance every which way, not realizing I see her bobble from where I stand behind a rolling costume rod. When she’s steady-ish, she flips her hair over and bends at the waist. I get an eyeful of ripped fishnet hose under her miniskirt and learn two things I wish I didn’t know: she doesn’t wear panties, and she shaves her girlie parts. She starts spraying again like she’s wielding Raid and her hair’s full of jack spaniards, but this time she clutches the wooden ledge in front of her.

The woman is a Grade A drunk, and when she isn’t drunk, she’s high. The bitch of it is she’s drop-dead gorgeous and has more talent than anyone in this dime-store-turned-murder-mystery-dinner-theater. Including me, because Jah hates me. Or God, as they say here in Wack-o, Texas, aka hell.

“Careful,” I say. “You’ll break your head.” I keep my voice light and use my pretend-helpful tone.

Maggie stands up quickly, swaying, looking for me, not fooled even three sheets to the wind. She tells me she thinks I’m number one with a middle finger salute from her left hand. “Diva,” she says in a hiss.

Maybe she’s right, but it takes one to know one. “Watch you’self. You fangs showing.” I play up my island accent and drop the continental diction I normally use here in the states. “Yanking,” we call it on St. Marcos, where I’m from, as in “talk like a damn Yankee.”

From behind me, the director—if you can give such a hoo-ha title to the cat herder in charge of It Happened One Weekend in Waco—scolds me. “Ava! Leave Maggie alone. We need her at her best tonight. It’s a sold-out crowd.”

The director’s always talking down to me. I’ve been stuffing cash in a pillowcase for a move back home, and I’m so close I can taste fresh island mango on my lips. I’d followed a no-count sumbitch named Zach from NYU to Vail to here, where he suddenly ups his game to a pill-popping, trailer-park-ho-banging, credit-card-stealing, bank-account-hacking loser who’s about to feel the long arm of the law.

I swallow the tone I’d like to use. “Yah, mon,” I say to the director, and I curtsy.

Lizbeth, as in no-E-no-A-because-I’m-not-Elizabeth, gazes at me, her expression vacant. Then her eyes shift, and she gets a load of Maggie. Her face sours, lips puckering. She turns back to me, and her tone is pure pain. “I was going to have Maggie take the lead tonight since Julianna called in sick, but”—she shakes her head—“I don’t think that’s gonna work. Can you take the role?”

Before I can answer, Maggie staggers forward. “That’s bullshit!” Her words are full-on slur. “I’m the first understudy.”

First understudy? What does she think this is, Broadway? I rake the crappy dressing room with a quick glance. Plywood walls with exposed wiring. Cracked linoleum squares on the floor. Bare lightbulbs dangling overhead. It’s dingy and low rent, and I almost gag on the stench of cigarettes, body odor, and old garbage underneath the Aqua Net. Ah, but how the mighty have fallen. Maggie used to be a bona fide rock star, Texana folk version, on the cover of Texas Monthly not even that long ago. She looks like a younger, hotter version of Shania Twain and sings like a folksier Natalie Maines. I hear tell she plays every instrument better than her band. Sometimes it’s her licks on their tracks. Yep, she was on an express train to Nashville and the big time, until she got kicked out of every festival she was booked to play at in the last year. Scuttlebutt is her band members up and quit on her, as did her manager, her agent, and her record label. Maggie’s sunk down with us bottom-feeders now. But she has to pay for that expensive Jack and coke habit somehow.

I ignore her and to Lizbeth say, “Irie,” the island version of “It’s all good.”

Lizbeth raises an over-tweezed set of eyebrows. “I’ll take that as a yes.”

It’s better than a yes, because if I kill it tonight, I might steal Julianna’s part out from under her. That could mean a big fat raise and put me a few weeks closer to the Promised Land.

From across the room, I hear another cast member and her boyfriend shouting at each other. It’s Becky, a mousy thing, but nice and not catty and stabby like Maggie. A secret admirer had sent her a huge bouquet of long-stemmed red roses earlier, and her man’s none too happy about it.

Lizbeth doesn’t allow anyone but cast backstage before a show, so I know Lizbeth is upset about Maggie being wrecked, since she doesn’t notice Randall. I keep a straight face as I watch Randall leaving in a huff from the corner of my eye. I didn’t know Becky had it in her.

The director goes on, speaking to me, but she’s eying Maggie. “Becky will cover your part, Ava. I’ll go tell her now.”

Lizbeth walks over to Becky, but stops short. A pale-skinned woman in sodden clothes, her freckles the color of her dripping hair, is rifling through the costumes, her face hidden. But everybody knows who she is. She tried out for my part, and she still can’t quite accept that I got it instead of her. The woman needs some Prozac.

“Cast only—you know the rules. You’ll have to leave now, Sandra,” Lizbeth says, putting a hand on her shoulder.

The space between all her freckles turns bright red. Sandra nods and scurries out the way Randall had a few moments before. She leaves little puddles behind her. It’s supposed to rain like a sumbitch out there tonight. Must be already.

Just as Sandra’s leaving, Maggie starts throwing a tantrum like a spoiled teenage girl, tossing her hair over her shoulder, fussing some more with her makeup, and muttering snotty and loud enough for everyone backstage to hear. “Nobody in the audience is going to buy some no-count black karaoke singer from the Islands playing a Baylor sorority girl.”

The room descends into an awkward silence, which I break with a sweet smile, Yankin’ in my best Texas drawl. “Chi-O, Chi-O, it’s off to bed we go.” I smooth my hair, which is shaved nearly to my scalp.

That brings the house down, or the back of it, anyway.

I skip off to change my costume and put on the blonde high-ponytail wig. I’ve always looked damn fine in red and yellow.

To continue reading, click HERE and subscribe to my monthly newsletter via email. This novella e-book is an exclusive gift to subscribers.