Your Roots Are Showing: The Story Behind the Story of Heaven to Betsy

by Pamela | Mar 13, 2017 | Book Club, Emily, My Half-Assed Efforts to Become a Serious Writer, Romantic Mystery Series, The Story Behind the Story, What Doesn't Kill You | 6 comments 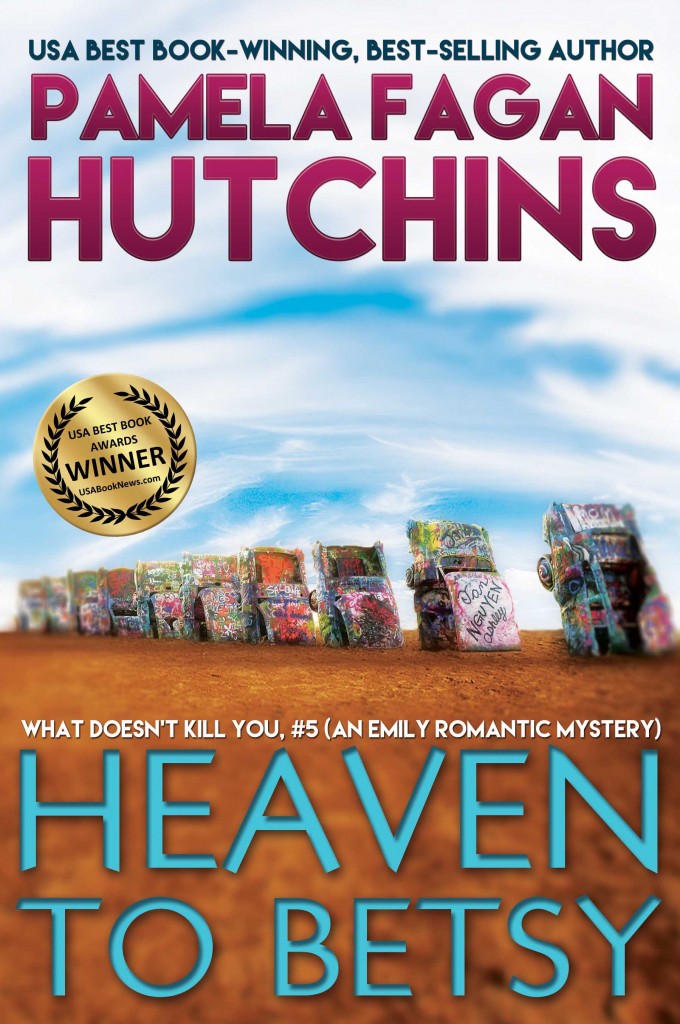 So here’s the truth behind Heaven to Betsy: I wanted to throw Katie’s best friend Emily back into her conservative hometown, after she’d moved away and become more moderate. Almost every element of the plot was written to show this hot seat she found herself in, where she questioned everything she was taught growing up, at the same time as she slowly came to appreciate some of it again. Her mother and Melinda Stafford most exemplified what she railed against. With her mother, at least, Emily eventually comes around.

Delicious (to me) irony: the original copyeditor for this book (a woman in her 20s) scolded me like I was a child for being politically incorrect and insensitive to every single non-white, non-Christian, non-American I wrote into the book. She did NOT shame me for stereotyping conservatives. Yet the one group that I stereotyped most blatantly was conservatives; largely white, straight, American, and Christian. LOL. I guess it’s okay to stereotype if goes against a group she doesn’t like??

But that brings up a few things that are important to me, so rather than tell you more about why I wrote the plot I did (which is that—in addition to the things I wrote about in the this post—I was fascinated by the issues around immigration, especially in border states, at the time this book is set):

1. Why did I let myself generalize more with conservatives, and paint them at times more negatively?

Because we are in Emily’s point of view, and she is questioning her past as she observes the bad behavior of certain people in her present.

2. Why did I occasionally lean toward political incorrectness with Emily’s observations of the world around her?

BECAUSE I BELIEVE IN AUTHENTICITY. PERIOD. Did I mention we are in Emily’s point of view? She has to think like a woman brought up in the time and place she was raised in (Amarillo with a rodeo cowboy father, and educated at Texas Tech), something I have great familiarity with.

Personal side note: I have spent most of my career working within organizations on creating and maintaining respectful workplaces. I have facilitated diversity training for twenty years. I have conducted thousands of interviews in harassment and discrimination investigations. My brother called me a femi-Nazi decades ago, before that copyeditor was even born. I believe in equality and respect. I believe some of my choices, actions, and stands helped pave the way for her and other women. And I believe she was wrong about Heaven to Betsy, as did her boss, who did the manuscript consult on this book and stood by it when I let s/him know about the copyeditor’s input.

I also believe I can impact ever so slightly how people view the world if I create the right characters and story (Please understand I don’t believe I can save the world with a romantic mystery, only impact it ever so slightly, one reader at a time). But only if I as a writer create authenticity. I can’t create a perfect world by rewriting it inauthentically. If, because of who they are, one of my characters will think about gender, national origin, religious, and race representation in, for example, their book or movie recommendations, then I make sure that I portray them doing just that. If my characters won’t give a crap about whether any female or GLBTQ or non-white writers or directors are represented in their  list, then I portray them in that way. I don’t balance out the recommendations that character gives because of MY need to right societal injustices or inequities. I don’t use my characters to set an example for humankind. Instead, I want them to reflect accurately humankind in their place, experiences, and time.

Does this make sense??? I hope so.

So I may have characters behaving or thinking “insensitively” at times. I think if you take a step back from the words on the individual pages of a novel like Heaven to Betsy, though, you’ll see a broader theme emerge that is one about creating a kinder world where we care more about each other. At least that is what I see and what I intended. IMHO it is in the jagged, ugly beauty of authenticity that we achieve this every now and then as authors.

3. Why does Emily behave so recklessly with regard to her pregnancy and future reproductive abilities?

BECAUSE SHE IS EMILY. SHE IS DEFINED BY HER RECKLESSNESS, by her lack of self-love, by feeling she is of no real value to anyone. She is at a point in her life where she takes chances, ignores risks, and—because she has not faced reproductive challenges—doesn’t yet realize both how much she wants a child and how fragile a woman’s ability to conceive and bear one can be.

She isn’t you, even if she ALMOST could be.

And that’s critical for readers to understand about fiction. The characters are meant to be someone other than you.

To me, good fiction is about a character who doesn’t do what we would do, yet, for reasons of his or her own, their choices are possible and just within the realm of belief, within a set of circumstances that are possible but not probable. It’s life re-imagined, not life just like we’d do it. So Emily (and my other characters) sometimes make choices I wouldn’t or that you wouldn’t. I’ve come to accept that, even when I’m disappointed in them, LOL. I didn’t like Katie’s behavior in Saving Grace, for instance. But she is her, not me. I just wrote her anyway. Same thing with some of Emily’s choices. And don’t get me started about Michele 🙂

[So to anyone out there who might have found it painful to read about Emily in Heaven to Betsy: I get it. Just like life, fiction can be hard. There are books I’ve closed, because they hit so painfully close to home (my home) that I didn’t want to experience it again in the pages. I’ve kept reading those authors, most of the time, just not those books. I encourage you to do the same. You are in control of what you let in, and what you push out. I don’t avoid topics to create safe zones because you aren’t forced to be inside the pages of my novel; you have to create your own perfect space, and there’s no easier place to do it than within a book. Shut it. Delete it from your ereader. Throw it in the crapper, for goodness sakes. And move on. I promise, there are no hard feelings.]

These, my friends, are the issues I struggled with as I wrote Heaven to Betsy. They are the story behind the creation of this story, if you will. And ultimately they led to it winning the USA Best Book Award for Cross Genre Fiction for 2015. <3 <3 <3

And it brought me to an awesome new copyeditor who swooped in to finish it with me, as well as the next three novels I’ve written. Rhonda Erb, you are the bomb, and I appreciate the heck out of you.

{Get all the Katie & Emily novels in one download in their box set, HERE.}