Well, folks, some of you may realize I haven’t been posting “content” per se, and some of you may have rejoiced at less email in your inbox from me. Either way, I thought I’d give you a little update on the life and times and writing plans of Pamela.

Searching for Dime Box was coming along fairly well. I was one week into it. Eric left for a week in Dallas on a Monday. I’d been feeling bad, but, honestly, I’d felt bad for so long, I thought it was more of the same. For years I’ve battled chronic infections and cystitis in my urinary tract, back pain, and, for the last year, stomach issues. In retrospect, it had gotten far worse, my face was swollen—I told Eric I thought I was bloated from water retention, but I worried I was giving myself an out for having gotten fat—and I was feeling depressed. But I just carried on as normal and tried to put mind over matter.

Until about 10 pm on Monday night. The “UTI” that was making me plan to go to the doctor the next morning was horrible. Unbelievably horrible. And then all of a sudden, it felt like something was blowing up inside me on my left side. The pain was unreal. I called my dad—a doctor—who said get to the emergency room. I live 30 minutes away. I was alone. I called Eric to call a friend nearby, and I grabbed my keys and left. Fifteen minutes later, that friend drove me to the ER in Brenham by 11:30. Four hours later, I was awaking from anesthesia post-surgery. In between those times is hard to describe. I’ve experienced natural childbirth. This was worse. And it didn’t make things any better when the doctor told me I had a life threatening issue: my kidney was in danger of rupturing because it was corked by a large kidney stone that had no way of passing. The life threatening element was that I had a severe bladder and kidney infection, and a rupture could cause sepsis and death.

Eric rushed home and made it back by mid-morning, where he has taken wonderful care of me every since.

So they put in a stent, stuck me in the hospital for a few days, then sent me home for a few weeks with a plan to deal with the stone and stent within a month. Apparently, my stone itself was chronically infected. I needed to heal the kidney that had the stretching of its life and take (six types, at last count) antibiotics because they couldn’t take me to Procedure 2 without both those hurdles crossed. I figured I’d lost a week of work time, and I’d get back to it while I waited for Procedures 2 and 3 of the ordeal. 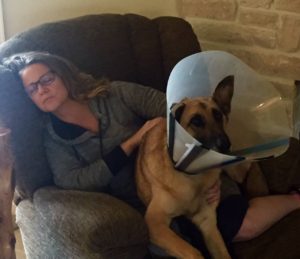 Georgia had surgery for ear hematomas. We comforted each other. 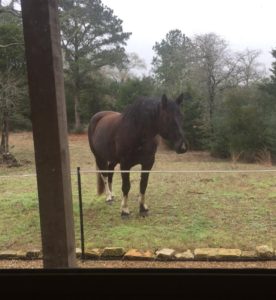 Katniss was a loyal sentinel at my bedroom window, bringing the herd to me since I wasn’t coming to the herd. 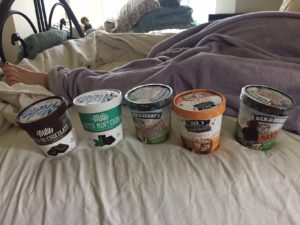 I got flowers, cards, visits from the kids, calls, texts, and FB posts galore. And I got a lot of nondairy ice cream from my sweet husband. 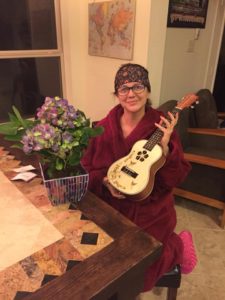 I even got a ukulele from readers IRL/friends online Karen and Tara which I am excited to teach myself soon!

Only that didn’t happen. Between nausea, unbelievable pain, and the impact of painkillers, I was nonfunctional for nearly four weeks. It was sort of like a coma, except that I was awake. Four weeks not of the planned vacation from writing I’d allotted myself in May, but four weeks of writhing and sleeping, hurting and feeling awful. I couldn’t sit, I couldn’t focus/think/concentrate. My creativity was nil. The meds made me depressed, too, and gave me nightmares and daymares, where I’d lie awake with my eyes closed and see horrible images of violence and death. I lost four critical weeks of my production schedule for the big novel releases that I need to go off well because it’s really, really hard to make money as an author, and I’ve invested and sacrificed a lot into my plans for the summer of 2018.

Meanwhile, people told me their stories of losing friends and family–young, healthy people–to sepsis, and I feel unbelievably blessed, even if I also feel stupid at the symptoms I’d displayed for years without putting two and two together (although my succession of doctors hadn’t either, this wasn’t my first stone). I was so thankful that our town has a hospital and a good urologist, and that the ER and OR staffs were wonderful. I’ve promised the nurses to name a character in Dime Box Cindy Shannon and make her act like Dene 😉 to honor three of them who helped me around both Procedures 1 and 2. Because there was a Procedure 2: they pulverized the heck out of that big stone, and it came out like sand. Which got me a lot of texts from our kids asking if it was like going to the beach, you know, when you get sand in your britches ;-).

The stent came out today, a week after Procedure 2. No more painkillers (hallelujah), no more pain, no more being unable to sit up straight. I am restored! If I don’t pull off a miracle and finish Dime Box in time for its planned August release, I’ll regroup. Push it back. Push the 2019 novels back. Celebrate the joy, blessing, and luxury of good health with my husband, family, and animals.

But we’ll just have to see.

I’ll tell you this, though: I might not have pulled off Dime Box without this emergency. The climactic events in the novel take place while Michele is in the Brenham hospital, dealing with a health issue that requires emergency surgery, the symptoms of which she had been ignoring, and fighting off the bad guy post anesthesia. I’d never been in that hospital, and couldn’t figure out what condition to give her. I think I’ve got those problems solved now 🙂

Now, you’re all caught up.

Meanwhile, for those of you who like to enter contests for free books, I have two for you! 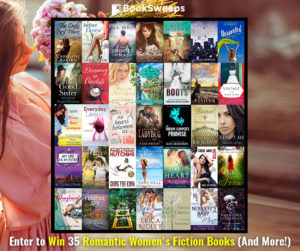 I’ve teamed up with 35 fantastic authors to give away a huge collection of romantic women’s novels to 2 lucky winners, PLUS a brand new eReader to the Grand Prize winner! You’ll receive a collection of FREE ebooks just for entering?

You can win my novel Going for Kona, plus books from authors like K.M. Jackson and Amy E. Reichert. 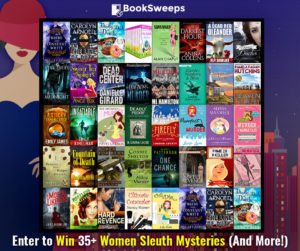 PLUS, I’ve teamed up with 35+ fantastic authors to give away a huge collection of women sleuth mysteries to 2 lucky winners, PLUS a brand new eReader to the Grand Prize winner! You’ll also get the free ebooks just for entering as well.

You can win my novel Heaven to Betsy, plus books from authors like Laura Joh Rowland and Nancy McGovern.

That’s all I have for now. Wishing you health,