Ending on a Good Note 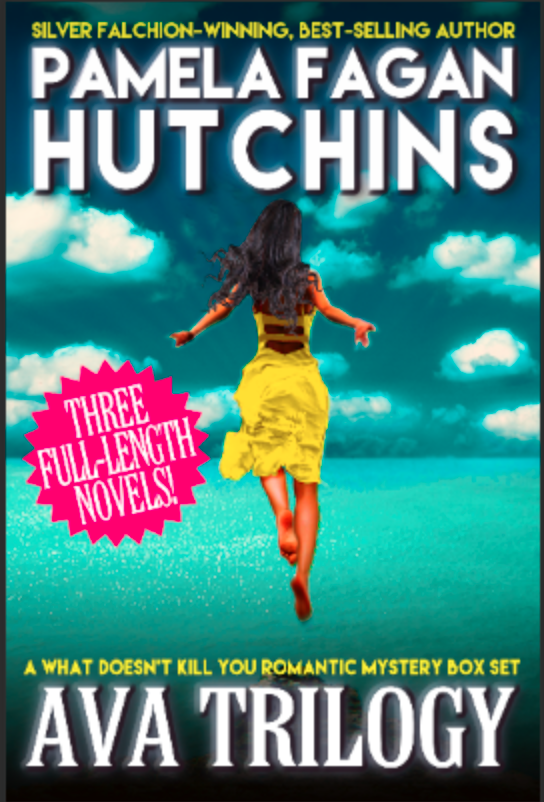 Guess what??? With all three Ava novels out, it’s time for . . . The Ava Trilogy Box Set!! Binge to your heart’s content for one great price. And in honor of the release of another complete trilogy in the What Doesn’t Kill You world (my fourth, but who’s counting, right?), I want to share with you why I write trilogies, as opposed to alphabet series.

Before we dig in, check out the newest podcast of Wine Women & Writing, where I talk CREEPY SOUTHERN GOTHIC CRIME FICTION with 2x-Edgar winner Lori Roy, whose new (awesome! I got an early read and loved it!) thriller, THE DISAPPEARING, releases July 17:

You know what I love? I love a great series with characters I want more of.

You know what I hate? Series that flog me to death with characters that never develop, even if they were great in the first three, four, five, or six books. Not all long series are like this. I just binged on CJ Box’s Joe Pickett series and can’t wait for #17 to come out next year. But, to me, this is an exception rather than a rule, and has more to do with the protagonist taking a fairly minor role in the alternating points of view. It’s like the 3rd Joe Pickett book instead of the 17th, if you know what I mean. (If you want to check them out, I highly recommend it. Start with Open Season.)

So when it came time to write my own series, I wanted to leave my readers wanting more of each protagonist when I finished with her. I wanted to take a character and develop her over a three-book story arc. Each of her books would be a standalone mystery novel, but when combined with the other two books about that protagonist, they would tell a story about her with significant, interesting personal growth occurring from book-to-book, and a satisfying romantic storyline as well.

With Katie, that means we have Saving Grace where she’s trying to belatedly grow up, Leaving Annalise where she’s becoming less self-focused, and Finding Harmony where she learns she can’t expect perfection out of others any more than she can expect it from herself. When I wrote the ending of Finding Harmony, I liked where Katie was. Honestly, I didn’t want to mess up her world, and if I’d continued with her I’d have had to. The way I write, the protagonist must have skin in the game. She has to have all she cares about at stake in each mystery in order for her to care enough to put herself at risk by taking ownership of solving it. My gift to Katie is a long and happy life with her husband and kids 😉 My gift to you guys is that I don’t dilute her impact on you by going on and on and on. (You’re welcome!)

Yet I don’t want to start over with a new world after I finish three novels for a protagonist. So I chose to do a world, What Doesn’t Kill You, where I can stay within the same community of characters and spin off trilogies for protagonists who we already know and care about. Enter Michele (Going for Kona, Fighting for Anna, and the upcoming Searching for Dime Box), Katie’s law school roommate, and Emily (Heaven to Betsy, Earth to Emily, and Hell to Pay), Katie’s former paralegal. And now Ava, her singing partner and island friend, in Bombshell, Stunner, and Knockout.

Then I did the same three-book character arc thing with them.

Emily: Heaven to Betsy: Emily discovers she wants a child, Betsy. Earth to Emily: Emily learns that she has a heart for the plight of endangered children. Hell to Pay: Emily realizes there’s nothing she won’t risk to help kids. We leave her in a happy place, and I think the mystery plots and romance turned out complex and satisfying as well. At least I hope they did. Readers are better judges of that.

Michele: Going for Kona: Michele overcomes her own grief for the sake of her son and stepdaughter. Fighting for Anna, my Silver Falchion-winner: Michele learns to be alone. The upcoming Searching for Dime Box: Michele has to figure out whether she can choose to be with someone else again.

And most recently, our sassy, sexy Ava: Bombshell: Ava has commitment and self identity issues. Stunner: Ava years for independence while she struggles with motherhood. Knockout: Ava learns to handle commitment, motherhood, and independence and figures out how to be true to Ava.

I let my protagonists make guest appearances in each other’s novels. Katie shows up in all the books so far. Emily in seven of twelve. Michele guested in Hell to Pay and Stunner and Ava in Earth to Emily and all three Katie novels. And many others cross over as well (Collin isn’t a protagonist but appears in nine novels so far; Rashidi is about to appear in his seventh; Nick shows up in seven).

I have two more protagonists in development for their starring roles.: Maggie (who you meet in Fighting for Anna) and Laura from the Emily novels. My Act One exclusive-to-subscribers novella stars all six protagonists (Katie, Emily, Michele, Ava, Maggie, and Laura), and I envision future ensemble novellas and short stories. Who knows what the future holds after these six women. I’ll let my readers have a voice in which characters you’d like to see spun-off from there.

What I don’t plan to write is more novels starring protagonists who have already completed their three-novel runs. For better or worse, that’s my strategy, and it’s working for me. I’m sorry, though, because I know how hard it is to walk away from a character you love and not continue in-depth in his or her world. Bring on more Joe Pickett, haha. Thanks for sticking with me anyway!

You can order any of my box sets, HERE, at the best possible prices. There’s nothing better than getting to the end, and having only to flip a page to keep the story going.