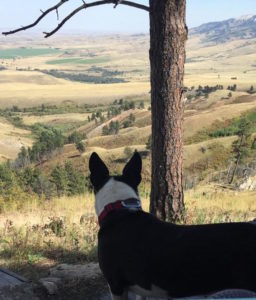 I had a big scare recently. For those that don’t know, Petey, our badass Boston terrier, is recently 95% blind. His life has changed tremendously this summer as a result. However, he has still enjoyed off-leash walks on the road in and out of our property.

One minute he was with Georgia and me as I worked with her on obedience/staying within 100 yards of me (she has reverted to a tendency to chase things and ignore me, so we’ve gone back to basics), the next moment he’d disappeared. I called and called for him, walking up and down the road looking for him, to naught. So I walked Georgia home as fast as I could to get our Razor and go back to search for him, meanwhile praying like a mad thing.

Our road makes an arc. I last saw him at the downhill end of it. When I got near the house, I saw a black and white speck moving in our pasture about 700 vertical feet below me. The little shit had somehow turned off through pasture and was crossing ravines and going through all kinds of foliage and terrain trying to get home. I called to him, and he heard me, but he got stuck in brush trying to get to me—because he can’t see it and he just plows through whatever is in front of him.

I was wearing running shoes, but I took off down what looked to be a less steep side of our road. The grass was covering up the true descent and I tumbled to the bottom of the ravine. Running shoes–not the recommended footwear for rough mountain terrain. I got up and made my way to him. He was very happy when I picked him up and carried him through the bushes, up the ravine, across the pasture, and back to the road. We were both exhausted.

I honestly don’t know how I ever saw him. It was just a flash before he got caught in the brush. Poor thing. He can’t ever go on a walk without a leash again; in fact I bought him a new harness since his collar slides from his thick neck over his little head on-leash. And a bear bell, so if he runs off I can hear him to find him. I may have bought him a new bed, winter hoodies, and some toys, too. Can you say spoiled little blind dog? I’m just so thankful I found him.

I lost Georgia’s collar, which was in my sweatshirt front pocket, when I fell down the ravine. I doubt I’d find it even if I went back for it. Which I’m not going to do.