We are never ever ever getting back together. 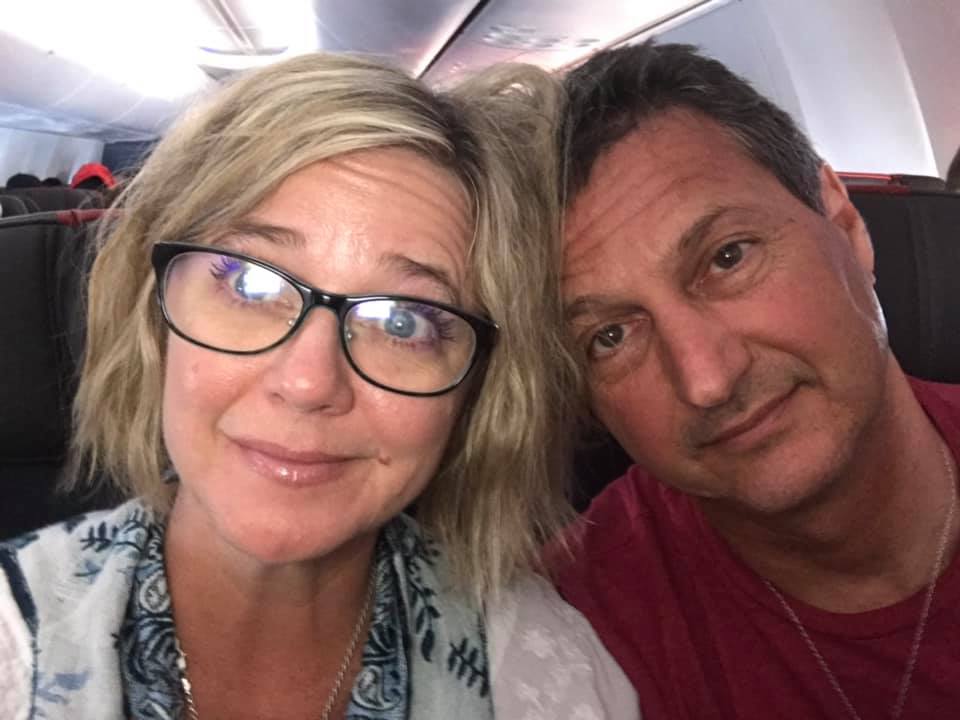 We made it onto the plane…just barely…

Last week I promised in “Mom is not a Quack” to tell you about how “Annalise” welcomed us back when we were on-island for our son’s wedding, then made it hard to leave, and, finally, the big trick she played on us.

{For those just jumping onto this blog cold, I write mysteries. Several have featured jumbie (ghost) stories of our time living in a tropical rainforest house on the US Virgin Island of St. Croix. The house is named Annaly. In the books—Saving Grace, Leaving Annalise, Finding Harmony, Bombshell, Stunner, and Knockout—I called her Annalise, so I’ll do that here.}

So . . . our reintroduction to Annalise was like hugging a beloved old friend you haven’t talked to in a long time. A lot of love, but a little awkward at first. We scampered around exclaiming over how beautiful and strong she looked, then we took off to go to a “remembrance” party for a recently departed friend. Here’s footage, below, of us driving up to the house, or here:

The next morning, after the remembrance party, and after we’d gone to the airport to pick the kids up from their redeye flight, Annalise played her first trick.

It was time to get ready for the day, and I wanted to put on some jewelry from my extensive Jewelweed Sprouts collection, made by my dear friend from our St. Croix days, Anita Schultz. 😉 When we were in our Dallas apartment before we left, I had packed it in a purple handbag then zipped that bag in an interior pocket of my carryon backpack, which I had also zipped up. I was carrying $10k in jewelry, so I was keeping it on my person, triple-wrapped. I kept my backpack with me at all times on the flights. But when I opened my backpack that morning on St. Croix, the handbag wasn’t there, and neither was any of the jewelry. I searched all the pockets, the house, the car, then had Eric search, then asked all the kids to look. All told, we ransacked that backpack probably ten times that day.

“Maybe you left it in Dallas,” Eric suggested.

I knew I hadn’t. I packed it in my backpack the night before our flight. The memory was very clear. “No.”

“Maybe it fell out in the airplane.”

One million sales and counting! Check out my chat with my new-best-friend-forever, Kim “K.L.” Slater about her psychological thriller, LIAR, HERE

“No. I had it double zippered in its own compartment. My laptop was in a different section altogether, so that I never had to unzip where my jewelry was.”

Eric ran his hand front to back through his hair. “Could someone have gotten it while we were at the airport?”

“I never set it down. We had a quick connection in Miami.”

Eric and I were equally perplexed.

I frowned. “Could someone have gotten in here and taken it?”

He frowned back. “I guess it’s possible. But if so, why wouldn’t they have taken either of the laptops, or anything else? Just your jewelry, triple zipped up?”

I was Jewelweedless the whole wedding week. I tried not to let it swamp me, but I was sad.

Still, the week was an ever-building love-fest between Annalise and us. There wasn’t a moment we spent with her where we didn’t feel loved and safe, notwithstanding Clark and Allie’s jumbie encounter (read my previous blog, “Mom is not a Quack”). We threw a “clean out the refrigerator” dinner party on our last night there, and I swear Annalise preened. Twenty new people to exclaim over her beauty, and for us to explain her history to proudly. Over and over, Eric and I talked about how happy we were to be there, and how much we still loved her.

Then we had to pack up and leave. Now, I am the first to admit that many factors could have impacted how things went between Eric and me during departure. Travel stress, emotions, and exhaustion. Sadness about leaving again, worry about some of our ill loved ones.. But I can also tell you that both of us at the same time started acting like crazy people. Like we’d been emotionally poisoned. Like there was some kind of cavitation around us, a vibration in the air, a shifting in the foundation of the house under our feet. For the last twelve hours we were there, we cried, and we argued, we cried, we argued, repeat, repeat, repeat. It was almost impossible to leave, because we were so distracted with the things going on inside us that we couldn’t get out the door. And then when we finally got in the car, we went right back into the house, and it started happening all over again, until one of us said, “Oh my God, we have to go or we never will.”

And we drove away, very fast, without looking back. Whether it had been the big jumbie or not, everything was peachy between us as soon as we were out of the rainforest.

In line to get on the plane, I whispered to Eric, “She didn’t want to let us go.”

“I feel bad for her. Like I’ve deserted her again.”

“But she’s well taken care of. Loved. Has visitors that think she’s wonderful.”

The next day, we were finally back in the barn apartment in north central Texas where we are sporadically squatting while we spend time with my parents. My dad has metatstatic cancer that has spread into his bones, and we want every second we can get, for us, and to distract the two of them from worry and fear. We told them the story of the jewelry as well as about every other second of the wedding week and island life they left behind a decade and a half ago. We made plans for dinner later, then parted.

“I need to file a lost and found report with the airline for my bag and jewelry,” I said to Eric. “Just in case. And then figure out if there’s any way we can get some of the money back from our homeowner’s insurance if the airline doesn’t find it.”

“Me, too. And sad. All the things you had Anita make for me. Or chose for me.”

He’d had Anita custom design a blue druzy and sterling silver necklace and earring set one year, and a black druzy, diamond, and 14 karat gold set another year, not to mention all the other treasures that were muse rings and pendants for each of my novels, or just “I love you” (or “I love me!”) gifts. And get this: when we’d visited St. Croix exactly ten years before in July 2009, I packed all my previous Jewelweed treasures (the first piece of jewelry he’d ever given me, and many others) in my suitcase—big mistake—and it was all stolen in San Juan by baggage handlers, who left only a few mismatched earrings in their hurry. Twice! No matter how hard I had tried to prevent it, it was happening to me a second time.

I got online and did my report. In the kitchen, Eric unzipped all the pockets of the backpack one last time and shook it out good. There was nothing in it. The jewelry was gone.

We finished unpacking our clothes, and I got my backpack from the kitchen to put it up in the closet. Only it didn’t feel empty. It had a lopsided heaviness to it. I walked to the bed, shaking it. There was a jangling noise. I unzipped it, reached inside, and pulled out my little purple handbag with every single piece of my treasures inside.

The jewelry was in the backpack. Exactly where it was supposed to be. Where it hadn’t been half an hour before, and hadn’t been for a week.

He walked in. I held up the bag.

His face accordioned. “Son of a bitch. I just emptied the backpack. I swear, there was nothing in it.”

“Nothing in it for a week,” I agreed.

He shook his head. “She did it again.”

I shrugged, smiling. “It appears that way. She knows we aren’t getting back together, but  I guess she’s forgiving us faster this time. ”

I lovingly sorted my jewelry and put on some beautiful blue labradorite adorned gypsy hoops and a matching pendant, with my giant Maggie-muse-ring, a pear shaped labradorite stunner. Then I thanked my jumbie and wished her well, and Eric held my hand as we walked to my parents house for dinner.

p.s. If you want to read our other jumbie experiences, check out the Katie books: Saving Grace, Leaving Annalise, and Finding Harmony. Our other long distance Jumble-Reach story from back in the day is actually in Leaving Annalise.

p.p.s. You don’t have to believe in jumbles. That’s fine. As for me and Eric, Annalise refuses to let us not believe.