How to Screw Up Your Marriage 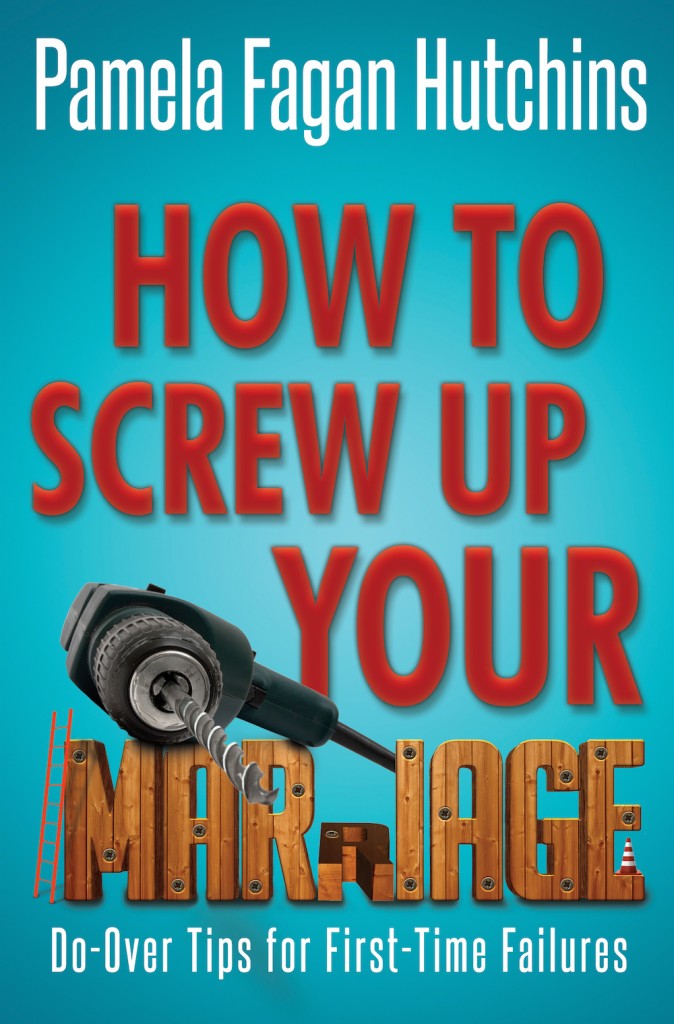 Part of the How to Screw Up series:

Let's face it. People keep getting into relationships. Yet over 40% of first marriages end in divorce and up to 67% of second do, too, with statistics becoming predictably more dismal as the number of trips to the altar rack up. It seems like, for many of us, the longing to be half of a couple so in love they make other people want to puke is too strong to ignore.

The problem is, we've all grown up to expect that fairytale endings happen by accident, that if we wish upon a star, or let down our golden hair, then, blammo, we'll get our happily ever after. In other words, we're lazy and feel entitled to have the one thing we want most in the world—the one thing we should work hardest to create and nurture—without doing squat to make our dreams reality. We fall in love, we marry, we pout, we nag, we sulk, and we sabotage.

How to Screw Up Your Marriage interrupts the pity party with a no-nonsense formula for couplehood success, written by a human relations expert who is herself in a wonderfully nauseating marriage with a passel of his and hers kids. Ebooks: Paypal Link. Paperback: Amazon Link. Audiobooks: Amazon, Audible, and iTunes Links.

>>> See why Hutchins is called an "up-and-coming powerhouse writer" and "the Erma Bombeck of her generation."

"The advice is gentle but to the point. Great read." — Walter Lawrence, Author of Dusty and the Cowboy

"It was funny, I mean laugh-out-loud-so-that-people-near-you-wonder-what-they-are-missing funny. Succinct and clear. Truly doable for any normal couple." — JKF

>>> Are you stepparenting, too?

Be sure to read How to Screw Up Your Kids: Blended Families, Blendered Style (the USA Best Book Award Winner in Parenting Divorce).

Bring me a bucket.

I love our messed-up, wacky life. But just because we adore and love each other, it doesn’t mean the rest comes easily.[1].

While I have no scandalous revelations for you, I can share the secrets of how two highly emotional, self-absorbed, over-committed Type-A losers at marriage (we are both each other’s second spouse) manage our relationship into the true thing of beauty that it is.

And I do mean manage.

(Are you choking on that vomit yet? Stick around.)

If my day job counts, I am a so-called expert in human relations. As a hybrid employment attorney/human resources professional and consultant, I get paid to help grownups manage their workplace relationships. The HR principles I apply at work are, in theory, principles for humans anywhere—like humans in a marriage, even a second marriage like mine.

There’s a good reason doctors don’t usually treat family members: when it comes to our loved ones, our rational selves are replaced by emotional creatures. Things get personal. Things get messy. All the psychological training in the world couldn’t guarantee that someone (and by someone I mean me) will play fair.

So it is with some embarrassment, and hopefully a bit of humility, that I will share our foibles and our feats. We understand how wrong we each got it on our first ride on the marriage-go-round, and we believe that through painful trial and error, we’ve finally gotten a grip on the brass ring. We know the statistics: over 40% of first marriages end in divorce and up to 67% of second do, too. The big issues—emotional intimacy, mutual support, compatibility, respect, sex, and money[2]—get even trickier when you add stepparenting, alimony, child support, ex-spouses, and the “It’s easier to say ‘I quit’ the second time” phenomenon. But we’re beating the odds, and we want you to, as well. And so we begin. Keep your Pepto-Bismol handy.

1. I’ll refer to family members, friends, and clients from time to time. Names have been changed to protect the innocent—which Eric and I are far from.

2. And, these days, I'd have to say that technology, like social media and smartphones, makes these issues more immediate and drives up the intensity.

There's nothing under the canoe, honey.

My husband and I went on our honeymoon in Montana in June, which unbeknownst to us was still the dead of winter. (We hail from the Caribbean.) At the time, we were training for a Half Ironman triathlon,training for a Half Ironman triathlon, so we needed to find an upper-body strength and aerobic substitute for swimming during our two weeks of bliss. Without taking the weather into account, we’d decided that canoeing or kayaking would suffice.

So off we traipsed from Houston to Montana, where we stayed in an adorable bed-and-breakfast near Yellowstone, which we picked because the owner advertised healthy organic food. The beets, quinoa, and cauliflower kugel we were served for breakfast weren’t exactly what we’d hoped for, but we felt fantastic. And hungry. Very, very hungry.

Our “Surprise! We’re vegetarian!” B&B sat near a tundra lake. For those of you who have not seen a tundra lake, imagine a beautiful lake in a mountain clearing surrounded by tall evergreens. Picture deer drinking from crystalline waters, hear the ducks quacking greetings to each other as they cruise its glassy surface. Smell the pine needles in the air, fresh and earthy.

And then imagine the opposite.

A tundra lake is in the highlands, no doubt, but the similarity stops there: no trees, no windbreak, no calm surface, and no scenery. Instead, it’s an ice-chunk-filled, white-capped pit of black water extending straight down to hell, stuck smack dab in the middle of a rock-strewn wasteland. Other than that, it’s terrific.

I promise he is smarter than this will sound. And that I am just as bitchy as I will sound. In my family, we call my behavior being the bell cow, as in “She who wears the bell leads the herd—and takes no shit from other cows.”

Eric answered, “Absolutely, honey. It’ll be great. Here, help me get the canoe in the water. I’d take it off the car myself, but with that wind, whew, it’s like a sail. Careful not to dump it over; it’s reallllly cold in there. Not like that, love. Where are you going? Did I say something wrong?”

I responded by slamming the car door. Anger gave way to tears that pricked the corners of my eyes. I stewed in my thoughts. I knew I had to try to canoe. I couldn’t quit before I started. We were training, and if I didn’t do it, Eric wouldn’t do it, and that wasn’t fair of me.

I exited the car. Eric was dragging the canoe out of the water and trying to avoid looking like a red flag waving in front of me.

Super-rationally, I asked, “What are you doing?”

“You’re not making me. I’m scared. I hate this. I’ll probably fall in and all you’ll find is my frozen carcass next summer. But I’m going to do it.”

We paddled clockwise around the lake in the shallows, where the waves were lowest, and I fought for breath. I’m not sure if it was the constriction of all the clothing layers or actually hyperventilation, but either way, I panted like a three-hundred-pound marathoner. It would have scared off any animal life within five miles if you could have heard me over the wind. Suddenly, Eric shot me a wild-eyed look and started paddling furiously toward the center of the lake.

“Eric Hutchins, turn the canoe back toward the shore!”

And as quickly as his mad dash for the deep had started, it stopped. He angled the canoe for the shoreline.

“What in the hell was that all about?” I asked.

“Nothing, love. I just needed to get my heart rate up.”

I sensed the lie, but I couldn’t prove it. My own heart raced as if I had been the one sprint-paddling. For once, though, I kept my mouth shut.

The waves grew higher. We paddled and paddled for what felt like hours, but made little forward progress against the wicked-cold wind.

“Eric, I really want out of the canoe.”

“We’re halfway. Hang in there.”

“How about we cut across the middle of lake and shave off some distance? That will get you to the shore faster.”

Now I really had to get out, because it was the second time I’d called the canoe a bad name, and I knew it would be out to get me.

Eric paddled us to the shore without another word. I’m pretty sure he thought some, but he didn’t say them. I got out, almost falling over into the water and turning myself into a giant super-absorbent Tampax. He turned the canoe back over the water and continued on without me. This wasn’t how I’d pictured it going down, but I knew I had better let him a) work out and b) work me out of his system. Looking like the Michelin man, I trudged back around the lake to the car and beat him there by only half an hour.

By the time we’d loaded the canoe onto the top of our rental car and hopped in, we were well on our way back to our happy place. Yes, I know I don’t deserve him. I don’t question it; I just count my blessings.

That night we dined out—did I mention we were starving to death on broccoli and whole-wheat tabbouleh?—to celebrate our marriage. Eric had arranged for flowers to be delivered to our table before we got there. The aroma was scrumptious: cow, cooked cow! Yay! And, of course, the flowers. I looked at Eric’s wind-chafed, sunburned face and almost melted from the heat of adoring him. Or maybe it was from the flame of the candle, which I was huddling over to stay warm. What was wrong with the people in this state? Somebody needed to buy Montana a giant heater. We held hands and traded swipes of Chapstick.

He interrupted my moment. “I have a confession to make. And I promise you are really going to think this is funny later.”

“Remember when I paddled us toward the middle of the lake as hard as I could?”

“I’m trying to block the whole experience out of my mind.”

“Yeah, well, let me tell you, sweetness, it was about ten times worse for me than you. But do you remember what you said about falling in, yadda yadda, frozen carcass next summer, blah blah?”

I didn’t dignify this with an answer, but he didn’t need one and continued without much of a pause. “Well, you were in front of me, breathing into your paper bag or whatever, when I looked down, straight down, into the eyes and nostrils of a giant, bloated, frozen, very dead, fully intact, floating ELK CARCASS.”

“I am not. It was so close to the surface that if you hadn’t still had those tears in your eyes, there is no way you wouldn’t have seen it. You could have touched its head with your hand without even getting your wrist wet.”

“No, you did NOT take me out on a lake with giant frozen dead animals floating in it.” A macabre version of Alphabits cereal popped into my mind.

“Oh my God. If I had seen it right then, I would have come unhinged.”

“More unhinged. I know. I was terrified you would capsize us and then you would quadruple freak out in the water bumping into that thing. I had to paddle for my life.”

He was right. I let him enjoy his moment; I’m glad he confessed. But I will never canoe on a tundra lake with Eric again. Even if I got my courage up, he would never invite me.

Cinderella, eat your heart out. (There’s video of the tundra lake and other parts of our Montana trip on my YouTube channel, The Land of Pamelot. Sorry, there is no video of the elk.)

Click here to continue with How to Screw Up Your Marriage.