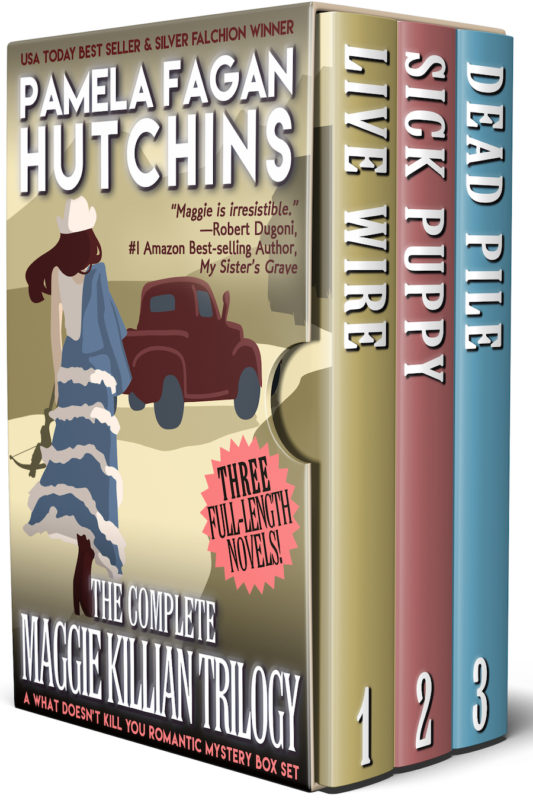 Cowboys, guitar chords, and a past full of crazy. If she’s not careful, Maggie’s old junk may wreck her new life.

"Hutchins’ Maggie is an irresistible train wreck—you can’t help but turn the page to see what trouble she’ll get herself into next." Robert Dugoni, #1 Amazon Best-selling Author of My Sister's Grave

Live Wire (Maggie 1): Washed-up alt-country-rocker-turned-junker Maggie Killian is pulled to Wyoming by an irresistible force . . . former bull rider Hank Sibley, the man who broke her heart fifteen years before. When she unexpectedly meets his Sunday school-teaching girlfriend at a saloon, Maggie seeks liquor-fueled oblivion between the sheets of a younger man’s bed. But after her beloved vintage truck breaks down and leaves her stranded in the Cowboy State, she learns her hook-up died minutes after leaving their rendezvous. Suddenly surrounded by men with questionable motives, Maggie searches for the murderer while fighting the electricity between herself and her old beau and her new penchant for local whiskey.

Sick Puppy (Maggie 2): Junker and former alt-country-rocker Maggie Killian tucks tail back to Texas with Louise, the mutt her bull-riding ex foisted on her in Wyoming after he gave another woman his heart. Maggie runs straight to Gary Fuller—her long time best friend-with-benefits and the biggest Texas country music star since George Strait—but arrives too late to save him from dying in a fire. She just wants to lick her wounds in her own bed with nothing save a bottle for comfort, but Maggie’s short term renter refuses to budge from her home. Soon her small town sanctuary is overrun with Nashville bigwigs, Gary’s trailer park family, and grief-crazed fans feeding the fires of media speculation about the bodies in her wake.

Dead Pile (Maggie 3): After Maggie Killian’s junker business goes into the shitter in Texas, the former alt-country-rocker packs up her vintage truck and rescue mutt for Wyoming and a sexy reunion with her ex, Hank Sibley. When she discovers Hank’s foreman unceremoniously dumped on the ranch’s dead pile—the repository for deceased livestock—deputies look no further than the ranch for suspects, especially the young Amish hand, Andy, who received a battlefield promotion of sorts. Because the two have bonded over his guitar lessons, Maggie worries about Andy, even as she is struggling to resolve her suddenly resurrecting musical past, the demolished business in her present, and the complexity of a future with a lover who has suffered from traumatic brain injury since his bull riding days, his disapproving sister, and his Alzheimer’s-stricken mother.

˃˃˃ Once Upon A Romance calls Hutchins an “up-and-coming powerhouse writer.”

If you like Sandra Brown or Janet Evanovich, you’re going to love Pamela Fagan Hutchins. A former attorney and native Texan, Pamela splits her time between Nowheresville, Texas and the frozen north of Snowheresville, Wyoming.

˃˃˃ Catch more adventures with Maggie and her friends in the What Doesn’t Kill You world. 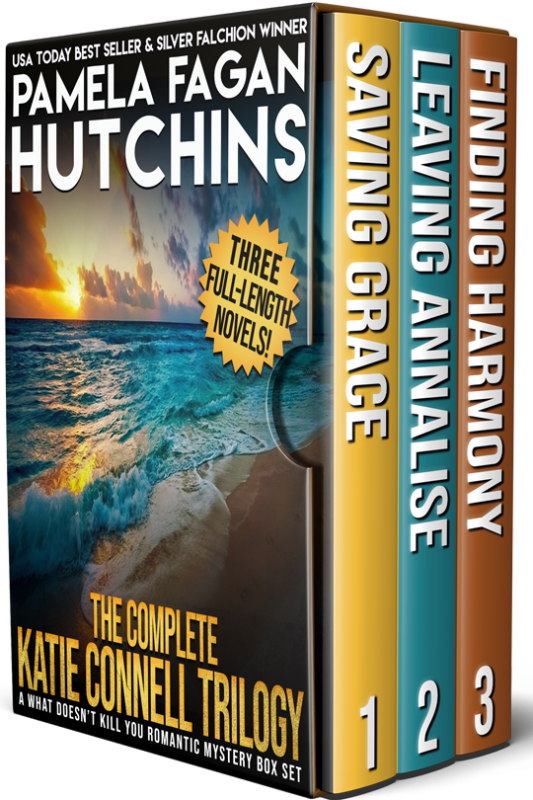 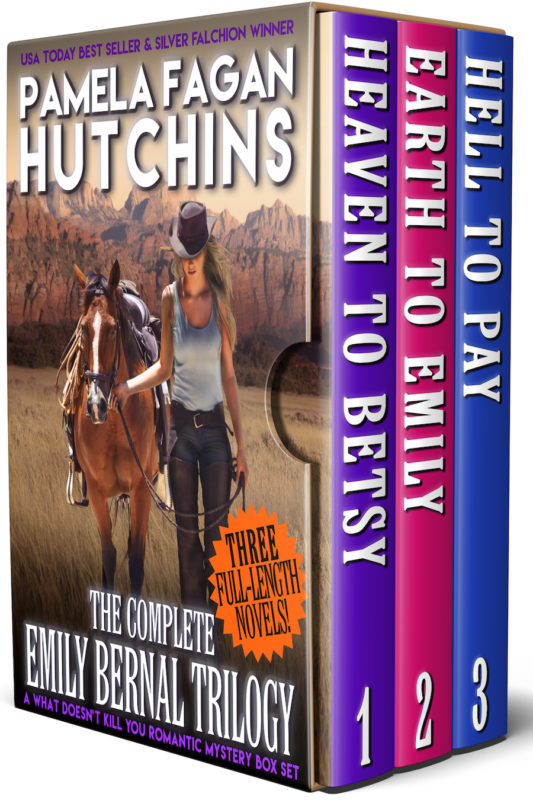 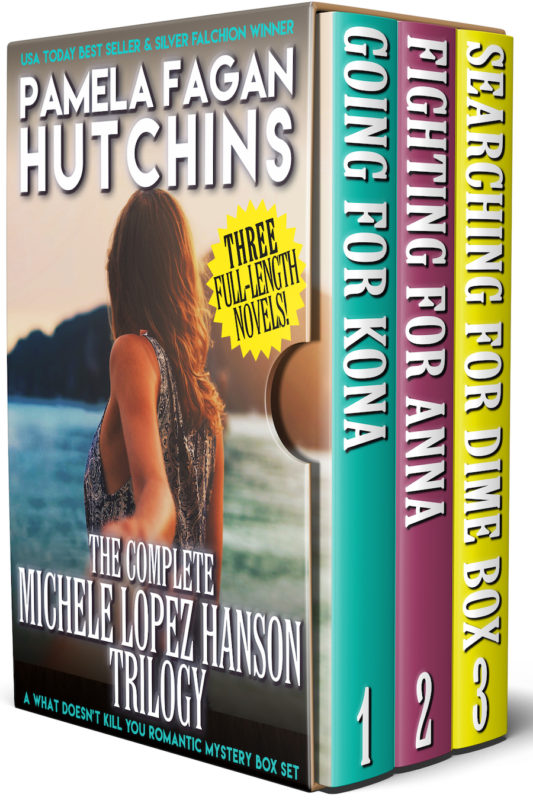 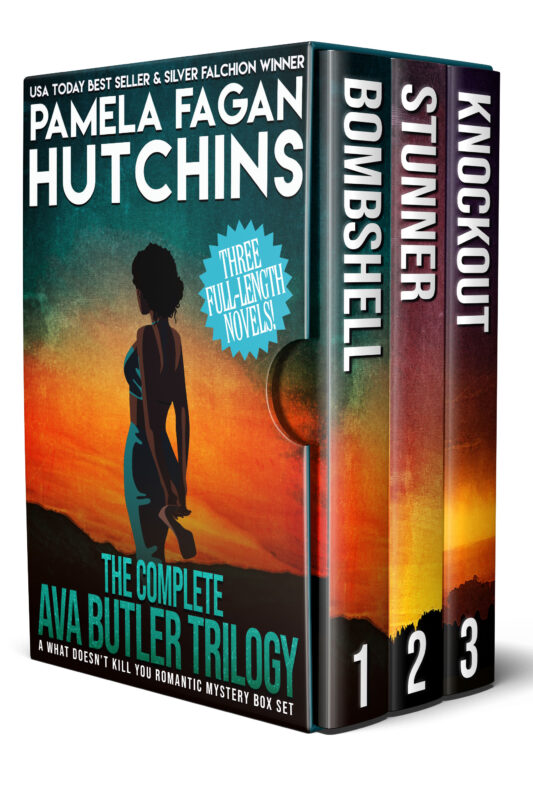 The Complete Ava Butler Trilogy Box Set
Endorsements
"Hutchins’ Maggie is an irresistible train wreck—you can’t help but turn the page to see what trouble she’ll get herself into next."
– Robert Dugoni, #1 Amazon Best-selling Author of My Sister's Grave
"Murder has never been so much fun!"
– Christie Craig, New York Times Best Seller
"You’re guaranteed to love the ride!"
– Kay Kendall, Silver Falchion Best Mystery Winner
"Hutchins nails that Wyoming scenery and captures the atmosphere of the people there."
–  Ken Oder, author of The Judas Murders
"Maggie's gonna break your heart—one way or another."
– Tara Scheyer, Grammy-nominated musician, Long-Distance Sisters Book Club
Preview
Share
Facebook Twitter Google+
Disclosure of Material Connection: Some of the links in the page above are "affiliate links." This means if you click on the link and purchase the item, I will receive an affiliate commission. I am disclosing this in accordance with the Federal Trade Commission's 16 CFR, Part 255: "Guides Concerning the Use of Endorsements and Testimonials in Advertising."